Edinburgh International Festival is giving out over 35,000 free tickets to celebrate its 75thanniversary, with performances featuring leading contemporary circus performers and world-renowned orchestras as well as an immersive installation described as a ‘spa for the psyche’. The free programme is dedicated to the residents of Edinburgh who have opened their city and helped the International Festival to welcome the world to Scotland’s capital for the last 75 years. 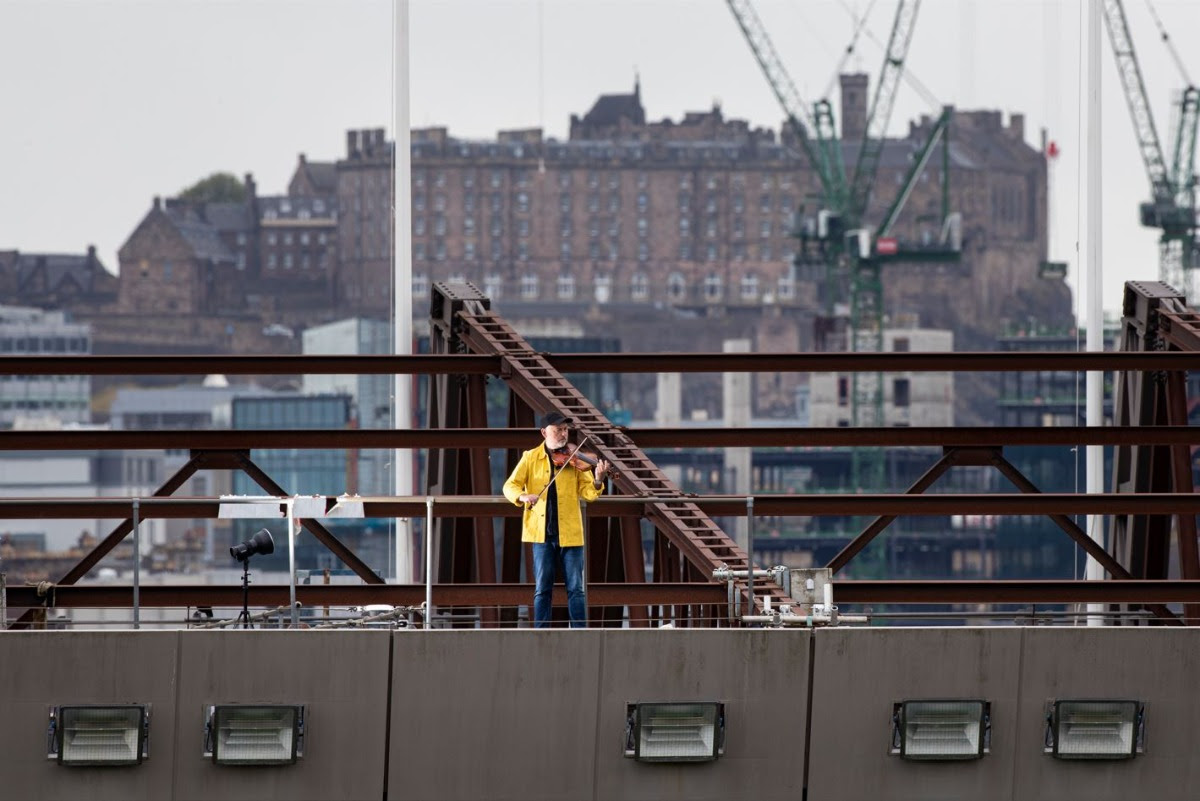 Fiddler on the roof: Aidan O’Rourke (pictured on the roof of BT Murrayfield) appears in MACRO alongside Gravity & Other Myths, Djuki Mala, the National Youth Choir of Scotland and other Scottish musicians. Photo credit: Duncan McGlynn

The 2022 Edinburgh International Festival opens on Friday 5 August 9:30pm with MACRO, a spectacular free event at BT Murrayfield. Presented as part of the UK/Australia Season 2021-22, MACRO features critically acclaimed circus and physical theatre company Gravity & Other Myths, who are joined by First Nations dance company Djuki Mala, the National Youth Choir of Scotland and Scottish musicians including Aidan O’Rourke, Brìghde Chaimbeul, Lauren MacColl and Kathleen MacInnes. The event is also supported by EventScotland, part of VisitScotland’s Events Directorate, who have championed this accessible celebration since its inception in 2015. 15,000 free tickets for MACRO are available from today here…

The Philadelphia Orchestra, led by conductor Yannick Nézet-Séguin, are in residence at the International Festival across four concerts including Thank You, Edinburgh – a free concert given as a big thank you to the city and residents of Edinburgh. This special concert from one of America’s leading symphony orchestras takes place at the Edinburgh Playhouse on Saturday 27 August at 3pm and will also be relayed live to the Ross Bandstand in Princes Street Gardens. The first 100 people to attend the live unticketed relay in the Gardens will receive a free snack pack, supplied by the International Festival’s official partners The Pantry and Bon Accord. Free tickets for Thank You, Edinburgh will be available from Monday 4 July.

Dreamachine, part of UNBOXED: Creativity in the UK, is a free immersive experience using light and sound to explore the potential of the human mind. The experience is created by Collective Act, presented by Edinburgh Science, and brings together Turner Prize-winning artists Assemble, Grammy and Mercury nominated musician and composer Jon Hopkins, and a team of leading technologists, scientists and philosophers. Taking place at Murrayfield Ice Rink, free tickets for Dreamachine will be available from Monday 11 July.

In a gesture of solidarity with the victims of the war in Ukraine, the Edinburgh International Festival and the Scottish Government are partnering to welcome the Ukrainian Freedom Orchestra for a historic free concert at the Usher Hall on Saturday 6 August 2pm. Assembled by New York’s Metropolitan Opera and the Polish National Opera, the Ukrainian Freedom Orchestra includes recent refugees, Ukrainian members of European orchestras and leading Ukrainian musicians and performers including soprano Liudmyla Monastyrska and pianist Anna Fedorova. Led by Canadian-Ukrainian conductor Keri-Lynn Wilson, the special concert sees invitations extended to the Ukrainian community in Scotland and organisations leading efforts in the resettlement of Ukrainian refugees. Free tickets for the performance will be available from Monday 18 July.

“As the Edinburgh International Festival prepares to celebrate its 75th anniversary, we wanted to acknowledge the dedication and hard work of so many of the city’s residents who have contributed to the Festival over the years. We are delighted that tickets for several our most ambitious 2022 productions will be completely free of charge”.

“We’re delighted to support the Edinburgh International Festival’s opening and closing events this year through the PLACE Resilience Fund along with the special appearance of the Ukrainian Freedom Orchestra, all of which are free.

“MACRO, the Australian/Scottish opening spectacle at Murrayfield, is a wonderful example of the cultural collaborations at the heart of the International Festival.

“I do hope people in Edinburgh – which is twinned with Kyiv – and across Scotland, will take this opportunity to hear the Ukrainian Freedom Orchestra and to show our support for the Ukrainian community in our city as well as the people directly affected by the war.

“And I’m especially pleased that NHS social and care staff and other front line workers who worked so hard during the pandemic will be given the chance to attend the closing ‘Thank You, Edinburgh’ event with the Philadelphia Orchestra at the Playhouse.”

“This is a very special year for the Edinburgh International Festival, not only does it see a full and exciting programme of artists and companies from across Scotland and the world, it is also marking its 75th year. The free programme is dedicated to the residents of Edinburgh and these 35,000 tickets are a wonderful way to celebrate this important milestone.

“From circus and dance performances to immersive experiences, incredible music and a historic performance by Ukrainian Freedom Orchestra, I would encourage everyone to explore this year’s programme and grab their tickets – it’s not to be missed.”

“EventScotland is delighted to be supporting this next evolution of Edinburgh International Festival’s free-to-attend Opening Event. The vision and ambition of the team has seen them continually push the boundaries of this event in order to make cultural events accessible to everyone and we are proud to have been part of this vision since its inception in 2015.

“Events play an important role in our communities as they allow us to connect and share memorable experiences, and after the challenges of the last two years, this and the other free events across the Edinburgh International Festival programme, will give anyone and everyone the chance to experience the buzz of live events.”

“75 years on from the Festival’s founding in the shadow of the Second World War, we find ourselves once again turning to culture to lift spirits and provide inspiration. The Free and At Home programmes ensure as many people as possible can access this world class celebration of arts and culture.”

The 75th Edinburgh International Festival takes place from 5 to 28 August, returning to Edinburgh’s theatres and concert halls at a scale not seen since 2019. Tickets for all performances are available here…