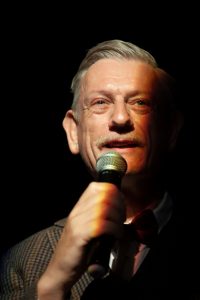 This year marks 35 years since Princess Diana’s famous visit to Middlesex hospital, where she visited Britain’s first specialist HIV/AIDS Unit and shook the hands of an AIDS patient. This well documented moment preceded by stark health campaigns in the late 80s targeted at the population in response to its emergence and hopes of tackling the illness, but with it evoking confusion and fear. Inspired by this particular moment of history and his own experience of living with HIV, LGBTQ+ writer Bren Gosling presents award winning show Moment of Grace, which forms part of various events showing as part of this year’s Pride in London, a piece delving deeper into this pivotal hospital visit and the stories behind it – helping to shed light and demystify. Ahead of the production, Bren tells us more about exploring the narrative further, creating the show in association with The National HIV Story Trust (NHST) and what to expect from a post show Q&A discussion taking place on Saturday 9th July after the matinee performance which will be chaired by BAFTA-nominated TV and film producer and NHST founder and trustee Paul Coleman.

Hi Bren, your award-winning show Moment of Grace will play from 28th June to 16th July at the Hope Theatre. How are you feeling ahead of the show?

Excited, nervous–a little bit but thrilled at last to be giving this play its first proper three-week staged run. The 1st of July is Princess Diana’s birthday.2022 is the 35th anniversary of the event which the play commemorates and celebrates, and of course this run of Moment of Grace at The Hope Theatre dovetails nicely with Pride. We are an officially listed Pride in London event.

Moment of Grace is about Princess Diana’s visit to Britain’s first specialist HIV/AIDs Unit at London’s Middlesex Hospital in 1987 and her famous handshake with an AIDS patient. How have you found exploring this significant event within your work further?

Exploring the subject was an emotional ride for me personally. As a young gay man in 1980s London, I remember Diana’s AIDS handshake moment very well. Digging further illuminated another powerful story from that event, someone else who was there that day who did something is outstanding, heroic, amazing. His story is now long forgotten. If I give anymore away, it’ll be a plot spoiler, so please seethe show!

I suppose the trickiest aspect of writing Moment of Grace was deciding where to hang the powerful narratives I’d uncovered from real life testimony in my research. I was clear from the outset, I wanted one of the characters to be a young, female nurse working on the AIDS unit and that another character should be a young gay man with AIDS. Character number three took some time to arrive. Eventually, I settled on a middle-aged white working-class fire fighter from Chingford estranged from his gay son. I’ve used this character –Donnie-as a foil for popular public opinion about HIV & AIDS in the 1980s.I wrote Moment of Grace in 2018, and since then have used a similar structure of three interwoven monologues in One Act for my play Invisible Me: three London singleton’s about to hit sixty overturn their social and sexual isolation. The play ran successfully last year at ATG’s New Wimbledon Studio.

The show has been created in association with The National HIV Story Trust (NHST). How have you worked together to realise the show?

The association primarily revolves around the massive amount of help and support the Trust gave me in researching for the play. They are a charity set up by Paul Coleman who will chair our Q &A panel after the matinee performance on the 9th of July. Paul introduced me to some of the testimonies he has collected from individuals who’ve been impacted by the UK AIDS pandemic pre-treatment era i.e., before 1996. The Trust sign posted me to key individuals who helped with my research, two of whom will be part of our Q&A panel. Dr.Rob Miller a consultant immunologist who was present on Broderip ward, Britain’s first AIDS unit in 1987,when Diana very publicly shook the hands of a patient. And, Theresa Burnsa nurse who worked with AIDS patients in the 1980s and whom I subsequently met at 56 Dean St in Soho, Europe’s largest sexual health centre. I interviewed Theresa there along with Leigh Chislett who set up the centre and who was also a young nurse who worked with AIDS patients in the late 1980s and early nineties.

On Saturday 9th July, there’ll be a 45-minutepanel Q&A after the matinee performance chaired by BAFTA-nominated TV and film producer Paul Coleman, who’s also a trustee and the founder of The National HIV Story Trust. What can be expected from this?

I am really looking forward to the Q&A panel. The cast will join me on stage along with Rob and Theresa to discuss the play its themes and its relevance to history, the LGBTQ+ community and what’s happening in the world now. Paul Coleman will chair. He will also take questions from the audience.

Ticket sales from both performances on July 9thwill be donated to the National HIV Story Trust in acknowledgement for their help with the play and the important work they continue to do ingathering testimony from people who were impacted by the UK AIDS pandemic.

Perhaps it is this. As a writer you set out with an idea for a new play – in this case it was Princess Diana opening Britain’s first AIDS unit and her famous handshake with a patient, pivotal in changing the public perception of HIV &AIDS. However, I uncovered another story about another real-life hero from that day, which has been completely forgotten. I had to write about it. So, although the play is about Diana’s handshake it is also about this other forgotten story.

I’ve learnt as a writer to be open to change direction on a subject of interest, when relevant to the drama of a piece.

I didn’t want to write verbatim theatre about HIV and AIDS. This has already been done. What I wanted to do was create three, interesting, fictional characters whose lives would have been deeply changed by the Diana AIDS handshake moment, then insert into these characters the most powerful stories I’d uncovered. I wanted to make a good, heightened drama.

Audiences will be taken on an emotional ride which transports them back 35 years into a London hugely different from now in which LGBTQ people were ostracised, homophobically abused and often scapegoated by major public figures and the tabloid press. It’s an especially important part of LGBTQ+ recent history and collective history. Prepare to be shocked, very, very, moved, and surprised. You will no doubt shed tears. But also, you will laugh at the dark humour. Overall, you’ll be uplifted by these narratives, which platform the power of compassion and human touch in the face of unimaginable suffering and adversity.

What would you like for audiences to take from the show?

Oh. I think I would like them to learn about something they might never have known about, particularly younger generation LGBTQ+ people. In that respect, I feel as an older gay man, that with Moment of Grace, I am passing on a baton. As I’ve said, the play is a search for the power of humanity in the face of extreme adversity. Moment of Grace highlights the power in small acts of kindness to shift prejudice, discrimination, and hatred. To covey loving kindness.

We could all do with some of that right now couldn’t we?

Moment of Grace will show from Tuesday 28th until Saturday 16th July 2022 at the Hope Theatre. To find out more about the production, visit here…

To read our review of Invisible Me, which was shown from Friday 3rd until Saturday 11th September 2021 at the New Wimbledon Theatre, visit here…