This year’s Greenwich + Docklands International Festival(GDIF) opens with the spectacular UK premiere of SPARK, the creation of Dutch artist and innovator Daan Roosegaarde, who takes inspiration from the natural phenomenon of fireflies, to create a reimagined and environmentally responsible public celebration, which updates the ritual of fireworks. The result is a poetic performance which will be presented over 2 nights in Greenwich after-dark on 26 and 27 August. Thousands of biodegradable light sparks will organically float through the air, inspiring visitors to wonder and reflect. 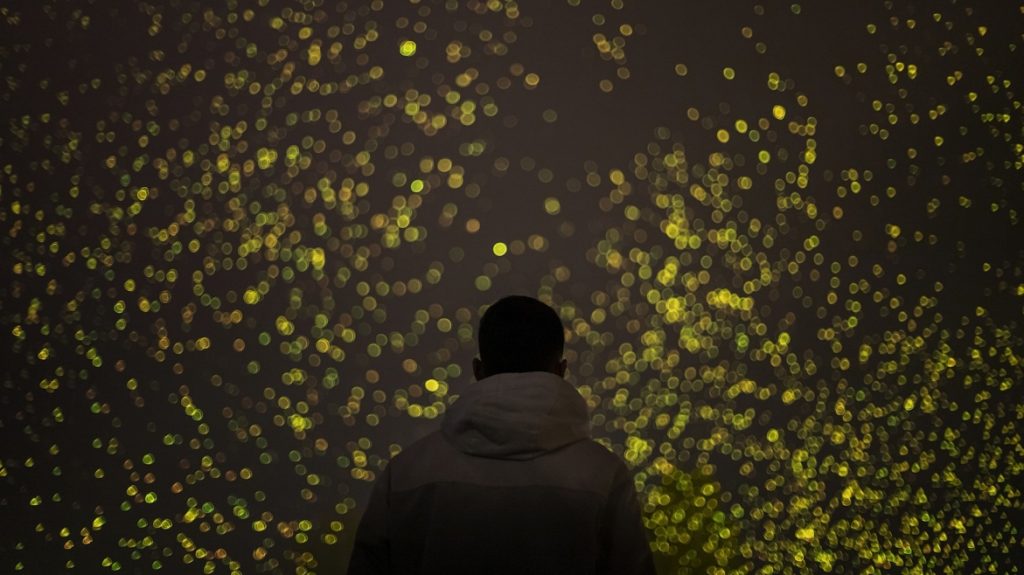 This year’s award-winning festival of FREE outdoor arts and theatre takes place across 18 days in London from the 26 August – 11 September. The eclectic 2022 programme welcomes a record number of international artists from countries including Spain, Germany, Flanders, Italy, France, The Netherlands, Ukraine and The United States and includes a total of 25 premieres (12 UK premieres and 13 new to London).

The festival theme of COMMON GROUND sets out to remind us of the importance of shared values, rituals and togetherness. Artistic Director Bradley Hemmings MBE said today:“ As we emerge from the pandemic, with growing economic challenges at home and terrifying events on our doorstep in Europe, I hope that this year’s festival will offer audiences a moment of sanctuary from the anxious times that we’ve been living through. It’s heartening that many of the incredible artists we’re working with this year are using the outdoors to offer us a glimpse of collective possibility and purpose.”

The Deputy Mayor for Culture and the Creative Industries, Justine Simons OBE, said: “I am delighted that the Greenwich + Docklands International Festival is returning this summer, demonstrating that London continues to be a global hub for the creative industries. There’s a fantastic range of free events from art to theatre to dance. I’m particularly excited to see a record number of international artists, who will be celebrating the theme of ‘Common Ground’ promoting togetherness and cohesion.”

Councillor Adel Khaireh, Cabinet Member for Equality, Communities and Culture said:“Our diverse and vibrant communities are what makes Royal Greenwich such a special place to live and grow up. The Royal Greenwich Festivals programme seeks to celebrate and connect us all through cultural activities, so we’re thrilled to be supporting Greenwich + Docklands International Festival as they explore the theme of Common Ground.I can’t wait to see residents of all ages enjoying the exciting programme of free theatre and arts events GDIF are creating this year.”

DISCOVER UKRAINE: BITS DESTROYED. Ukraine’s rich cultural heritage is currently under devastating attack: in response, artists in Kyiv have created a dazzling digital artwork, projecting images of 56 monumental mosaics over four nights onto the façade of the Old Royal Naval College. Originally created in 2019 (Discover Ukraine: Bit by Bit), this reimagined spectacular audio-visual event, is presented under the umbrella of the UK/UA Season of Culture with support from the Ukrainian Institute and British Council specifically for GDIF. Many mosaics in towns and villages across Ukraine have been destroyed since the Russian invasion. This poignant event is an important way of ensuring that Ukraine’s cultural legacy is remembered, supported and celebrated.

THIS WOVENO is part theatre, part sculptural install at ion in the Royal Arsenal Woolwich’s Dial Arch Square. Graeae, the UK’s leading disabled-led theatre company present a specially comissioned programme of accessible theatre and storytelling entitled TALES FROM THE WOVEN O framed by disabled artist Oliver MacDonald’s circular auditorium, woven entirely from willow. Through spoken word, movement, and tactile interactions, alongside a beautiful soundscape, audiences will have the opportunity to move in a moon dance, touch butterfly wings and listen to wild secrets from the earth. All performances will be accessible with BSL and audio description. A World Premiere.

EN ROUTE TO COMMON GROUND is a new promenade experience by Greenwich-based Luca Silvestrini’s Protein, one of the most distinctive voices in British dance theatre. This cinematic dance odyssey takes place through Woolwich’s public spaces, connecting communities as dance, storytelling and specially composed music unfold all around.

In the second year of GDIF’s partnership with Flanders, (the Dutch speaking northern region of Belgium, known for its high-quality performing arts), there will be a focus on new Flemish circus, with productions including FOLLOW ME from Be Flatinviting audiences on an interactive parkour journey through The Moorings Estate in Thamesmead; BARRIÈRE a playful fusion of circus and live music from Sur Mesure and B.V. NATUUR from Karel Casier and Aat Dirks, a performance with a timely environmental message, both at the Old Royal Naval College and Avery Hill Park.

Geology, sci-fi and rave culture come together in GEOPHONIC, a guided site responsive performance piece and sound walk at Greenwich Peninsula by Gobbledegook Theatre. Discover the stories of the rocks beneath our feet and hear the sounds that shape our landscape.

A children’s playground in Thamesmead at dusk provides an evocative setting for audiences to experience Fevered Sleep’s brand new audio artwork THE SKY IS FILLED WITH THUNDER.mWorking with children from Thamesmead’s Windrush Primary School and Hawksmoor Youth Centre, this innovative arts company celebrates the imaginative intelligence of children, capturing their voices in all their emotional complexity.

Nature, art and technology by cutting-edge robotics company Air Giants combine to create a beautiful and arresting art installation in Bethnal Green Gardens. UNFURL is a garden where the plants reach out to connect. A truly surreal encounter with soft robotics where science and art intersect.

RELAXERETTE is a mindful reinvention of a fairground ride in which audiences are invited to escape from the bustle of the city and spend a dreamy afternoon at Canning Town’s Rathbone Market, sinking into a magical merry-go-round of revolving hammocks while listening to a collection of sounds and stories and escape into a riveting rush of words. Conceived by Dutch artist Arjan Kruidhof.

Peter Hudson’s CHARON, is a monumental 32ft high kinetic artwork featuring Zoetrope technology originally created for the Burning Man Festival. Each night, bathed in light and sound and powered by volunteers, Charon, adorned with rowing skeletons, will animate and evoke the mythological Greek ferryman of Hades, whilst bringing the spirit of Nevada’s Burning Man Festival to a new Royal Docks festival destination site in Canning Town.

House of Suarez, creators of Statues Redressed (Sky Arts), the legendary touring annual VOGUE BALL, present the premiere of a special commission at the Old Royal Naval College. HOUSE OFOAK AND IRON, an empowering fusion of contemporary dance and voguing offering a uniquely Black and Queer perspective on past and present struggles for equality.

In a UK Premiere, German artist Stephanie Lüning will unleash a tidal wave of multi-coloured foam at Greenwich Peninsula with ISLAND OFFOAM: VERSION XVIII in a sublime and entrancing transformation of public space. Audiences are invited to observe and interact with this ephemeral and entrancing spectacle.

DANCING CITY is a two-day annual dance takeover of the public spaces and waterfronts of Canary Wharf featuring 11dance performances. A much-loved bedrock of GDIF, this year productions include SLEEPWALKER, an inclusive-emotionally charged duet challenging perceptions of movement, presented by The Royal Ballet’s Kristen McNally, Alexander Campbell and disabled dancer Joe Powell-Main; and Spanish company Cia Maduixa using stilts and choreography, to tell the story of female migrants fighting for a place to call home in MIGRARE, a poetic UK premiere.

GREENWICH FAIR is GDIF’s annual one day family-friendly festival of street theatre, dance, installations and games, which this year includes LOOK MUM, NO HANDS! a tender and unexpected story about friendship and growing up by Daryl Beeton and Mimbre; EAU DE MEMOIRE a London premiere of a unique and immersive ‘perfumance’ celebrating the memories evoked by our sense of smell from Francesca Baglione; and BLACK VICTORIANS, a moving dance production, created by renowned choreographer Jeanefer Jean-CharlesMBE inspired by the forgotten black presences in pre-Windrush Britain, set against the backdrop of the Cutty Sark Ship, which was launched in 1869. For adults only, immersive theatre maestro Chris Green’s FEEL PLAY, encourages grown-ups to dive into a bouncy castle and play their way to great mental health in a tongue in cheek and energising theatrical experience.

ON YOUR DOORSTEP takes family-friendly performance right into the heart of communities, in housing estates, basketball courts, playgrounds and parks across Greenwich and East London. Originally conceived and prompted by the pandemic in 2020, this year the line-up involves 7 extraordinary pop-ups. Highlights include: CROWD_CTRL, a dance and digital collaboration between choreographer AndroidX (AKA Malick Bright), scenographers MHz and London’s Dragons quad busking crew; OUT OF THEDEEP BLUE by Autin Dance Theatre in Avery Hill Park featuring world-class puppetry in a magical and interactive environmentally-themed adventure with Eko, the 13ft tall Sea Giant who has emerged from the deep to transport audiences of all ages into another world; and acclaimed playwright Ryan Calais Cameron(For Black Boys,Royal Court) and choreographer Jade Hackett(Hex: The Musical, National Theatre) collaborating to explore experiences of migration and the evolution of British culture in THE TIDE. This outdoor theatre production in Rathbone Market, Canning Town, is presented by Talawa Theatre Company.

GDIF attracted over 75,000 visitors to the festival in 2021 and this year numbers are expected to top 80,000 at events presented in a range of public spaces across Greenwich and East London.