The JMK Trust today announces the shortlisted directors, and the designers they are partnered with, for this year’s JMK Award – Emily Aboud, Joanna Bowman, Emerald Crankson, Leo Doulton, Dale Edwards, Masha Kevinovna, Indiana Lown-Collins and Elsie Yager. Presented in partnership with the Orange Tree Theatre, the winning director will stage their production there this Autumn as part of Paul Miller’s final season at the venue.  The winner will be announced on 13 July at the Orange Tree. 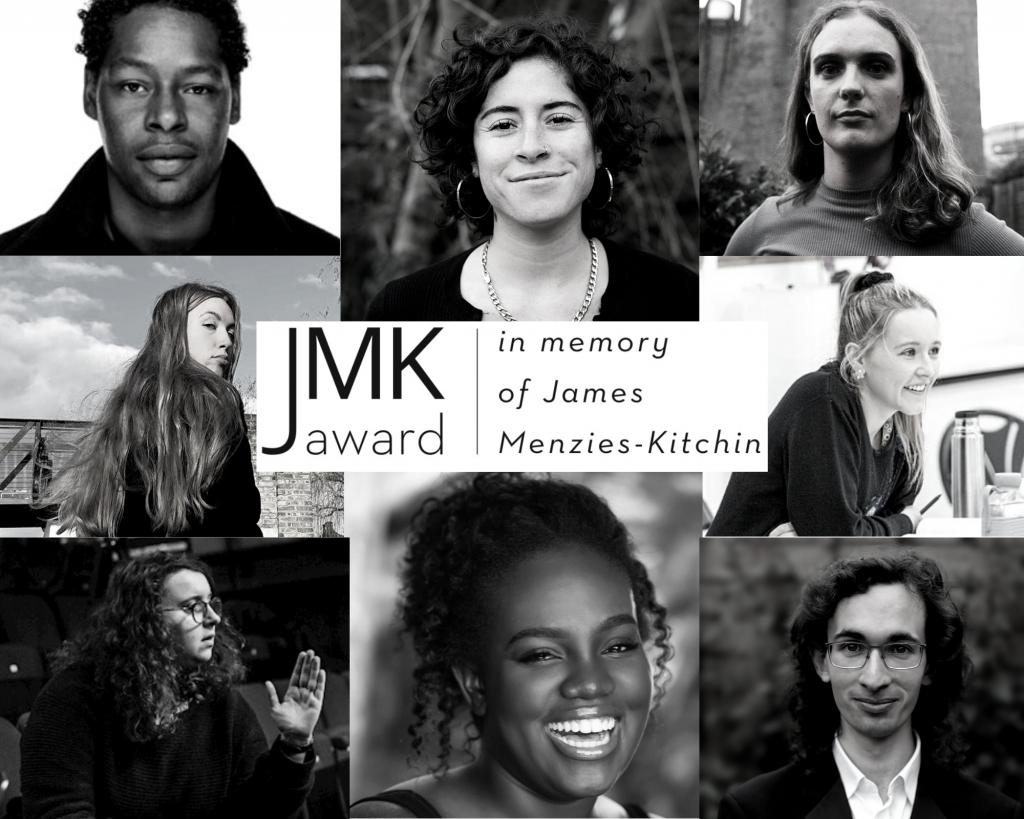 The shortlisted directors/designers and their chosen productions are:

Indiana Lown-Collins (she/her) with her production of The Solid Life of Sugar Water by Jack Thorne. Designer: Ica Niemz (he/they)

Stephen Fewell, Chair of the JMK Trust, said today, “This year’s shortlisted directors represent some of the most exciting directors across the country, and we’re faced with the considerable challenge of choosing to promote the work of just one, when they are all so deserving of career success. At this time, when venues are finding their feet and their audiences again, we hope that by announcing this shortlist each and every one of them will attract interest and work opportunities. Of course, the winner receives a full production and the support of our host venue The Orange Tree Theatre, who already do so much to support and promote early career artists.”

The JMK Trust was founded in memory of James Menzies-Kitchin, a young director of great promise who died suddenly and unexpectedly at the age of 28, to give opportunities to theatre directors of similar ability and vision. Each year it gives one prestigious award to enable an outstanding applicant aged 35 or under to create their own production of their choice of classic text. Its intensive development and selection process has itself given powerful impetus to the best theatre practitioners of the future. Previous winners have become major players in British theatre, including Thea Sharrock, Orla O’Loughlin, Bijan Sheibani, Joe Hill-Gibbins, Natalie Abrahami, Roy Alexander Weise and Polly Findlay.

The expanding National Directors Programme provides year-round training, mentoring, bursaries and support for directors of all ages. The current partners in the programme are Bristol Old Vic, HOME in Manchester, Royal and Derngate Northampton, Wiltshire Creative, Traverse Edinburgh, Birmingham Rep, Northern Stage, New Vic Stoke, Nottingham Playhouse, Reading Rep, and Leeds Playhouse. The programme at each partner venue is run by the JMK Trust’s Director Practitioners – who are established, locally-based directors. They curate a free programme of workshops for their region, working with their nearest partner venues to tailor the work to the needs of local directors. An essential network seeking talent from across the UK, the Programme feeds into the JMK Award, enabling a truly national reach.

An Orange Tree Theatre Production in association with The JMK Award

A brand-new production from an emerging theatrical talent. The winner and play will be announced on 13 July 2022. Tickets are now on sale here…

The OT produced the JMK Award-winning production for the first time in 2019 with Tristan Fynn-Aiduenu directing a critically acclaimed production of Little Baby Jesus by Arinzé Kene.

The JMK Trust gives opportunities to young theatre directors of similar ability and vision, allowing one such director a year to stage their own professional production of their choice of play. Last year saw Diane Page directing Athol Fugard’s Statements After An Arrest Under The Immorality Act.