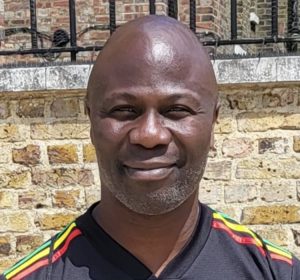 Recorded in the ship’s logs in the early 1600s, English sailors voyaging on behalf of the East India Company stopped off in Sierra Leone where they performed Shakespeare’s Hamlet to local dignitaries. Although Shakespeare was an active playwright of the time, the gesture is one that is questioned, why? An examination of this encounter, which predates the Atlantic slave trade, multi award nominated writer Rex Obano presents The Hamlet Voyage – an age before British imperialism and before Shakespeare becoming globally recognisable. Having played at Bristol Harbour Festival’s 50th anniversary on board the Matthew ship, a replica sailing ship, the production will play at the Bridewell Theatre from the 20th to 23rd July. Ahead of the London premiere, Rex tells us more about exploring this part of world history further, working with the production team to realise the show and what audiences can expect!

Hi Rex, your award nominated show ‘The Hamlet Voyage’ has just premiered at the 50th anniversary Bristol Harbour Festival and will receive its London premiere on Wednesday 20th July at the Bridewell Theatre. How are you feeling ahead of the London run?

Honoured, blessed and anxious… naturally.  I am lucky enough to be able to, through this production, share this story with an audience.  Plays are meant to be performed and the premier at the Bristol Harbour Festival was received well by the audiences and so I am super excited for the London run.

The Hamlet Voyage examines a unique cross-cultural encounter that took place before England became deeply involved in the Atlantic slave trade before the age of British Imperialism, and before Shakespeare became a global name. How have you found exploring this part of world history further?

Well, I thought I was well versed in Shakespeare chiefly as I have written plays dealing with the black experience in Britain in Elizabethan England but I was ignorant of the events surrounding ‘The Hamlet Voyage’ before I was commissioned to write the play by Re:Verse Theatre. With the team of researchers and dramaturgs I was able to learn more about the history which then helped me craft a story, which is obviously fictional, in places that did justice to the facts.  At its heart the play examines how the Shakespeare play was used by the English imperialist as a diplomatic tool in order to gain advantage in trading negotiations.  It asks the question – were the ‘so-called’ savages in fact the colonisers?

The play is presented by Re:Verse Theatre, directed by Ben Prusiner, designed by Olivia Altaras, with puppetry direction and design by Anurupa Roy, music direction by Jeevan Sigh, movement direction by David Dravie John, assistant direction by Neuza Pereira Sa, Shakespeare and Maritime History dramaturgy by Laurence Publicover and Sierra Leonian History and Culture dramaturgy by Joseph Bangura. How have you all worked together to realise the show?

Even though we met in Zoom calls at the start of the play’s development, the collaborations didn’t really begin until an early draft of the play was written.  It was then that these fantastic creatives got to work and I was able to draw upon their expertise to further dramatically enhance the story.  It was a completely symbiotic relationship where we all drew upon each other, inspiring each other to do our best work in telling this important story. I am not a writer who has Sierra Leonian heritage, but with the help of David Dravie John and Joseph Bangura I have worked to make the Temne scenes as theatrically authentic as possible.

The play was long-listed for a prestigious Alfred Fagon Award this year. What does this mean to you, to have your work acknowledged in this way?

It is always an honour to be acknowledged by the Alfred Fagon Award.  I have been twice shortlisted with previous plays, but the draft I submitted was a very early draft! The play hadn’t really taken shape then.  I just took a punt so I was bowled over when it was longlisted.

I haven’t been commissioned to write many theatrical plays usually the ideas for my plays originate from myself.  Having to write from the directors Ben Prusiner’s idea has been a challenge that I have relished as I have been able to still maintain my theatrical voice throughout and blend the themes into an entertaining piece of theatre.

We have strived in this production to blend the three cultures – the Temne (Sierra Leone), the Mughals (India) and the English in an entertaining piece of theatre that mixes verse with Asian poetic language, blank verse with heightened language and parables from Sierra Leone and Shakespeare’s plays Hamlet and Richard II.  There is something for everyone – not just lovers of Shakespeare and historians and in that what we have strived to do is to show how similar these cultures are if we respect their differences.

I suppose the main thing is in connection with the adage “history is written by the winners”.  That may be true, but the colonised peoples of the world may not have won the war, but there may have been battles that they won.  This show portrays a version of history where a battle was won – where the colonised were not victims, but a respected peoples with agency.  I have learnt that these kinds of plays are needed, but also can be entertaining, funny, poignant and moving as well.

The Hamlet Voyage will show from Wednesday 20th to Saturday 23rd July 2022 at the Bridewell Theatre. To find out more about the production, visit here…

« Previous post
Award-winning actor, public speaker and the first TV host living with Down syndrome at Australia’s national broadcaster ABC Julia Hales talks about her show ‘You Know We Belong Together’ to play at the Southbank Centre
Next post »
Free theatre courses in Leeds and Sheffield ‘celebrate the wealth of deaf and disabled talent’