Award-winning actor, public speaker and the first TV host living with Down syndrome at Australia’s national broadcaster ABC Julia Hales talks about her show ‘You Know We Belong Together’ to play at the Southbank Centre 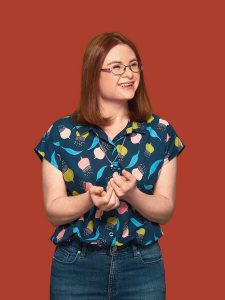 Determined to improve the representation of disabled artists on our stages and screens, award-winning actor and public speaker Julia Hales has broken barriers by becoming the first TV host living with Down Syndrome to present on Australia’s national broadcaster ABC. Initially performed in 2018 as part of Perth Festival, before being staged in 2019 as part of Black Swan State Theatre Company’s season, her show You Know We Belong Together, will make its UK premiere at the Southbank Centre, Purcell Rooms from the 18th to 20th August, before a run at this year’s Edinburgh Fringe Festival. A collaborative effort including fellow ensemble members Joshua Bott, Patrick Carter, Tina Fielding, Mark Junor, Melissa Junor and Lauren Marchbank, You Know We Belong Together is an exploration of the ensemble’s personal experiences and their day to day realities via monologues, video, scenes, dance and song. Ahead of the production, Julia tells us more about exploring the show’s themes further, her inspirational advocacy journey so far and what to expect from the show.

Hi Julia, the UK premiere of your show You Know We Belong Together will show at the Southbank Centre’s Purcell Rooms from the 18th to 20th August 2022. How are you feeling ahead of the show?

I’m feeling incredibly excited that my friends and fellow six cast members and creatives will finally showcase the production overseas. It’s so fantastic. It’s a deeply personal, life affirming work about love and acceptance. Myself and friends can’t wait to share it with you. Since presenting You Know We Belong Together as part of 2018 Perth Festival and again in 2019 as part of Black Swan State Theatre Company’s season, we have updated and researched more of the back history of Down syndrome and how people were treated in the two hospitals back in my home state of Western Australia. We have also included some of the wonderful things that have happened for our cast members. Tina Fielding’s short film Sparkles has had international screenings, Patrick Carter has enjoyed solo exhibitions and a distinct body of digital artworks, while Lauren Marchbank and Joshua Bott continue their dance practice and married couple Melissa and Mark Junor talk about their happy independent life living in regional Western Australia.

You Know We Belong Together is an exploration of love, loss, family, friendships and the frustrations and aspirations of living with Down Syndrome. Having had the dream of starring in iconic soap opera Home and Away, but never seeing a person with Down Syndrome in the cast, how have you found exploring this further within the show?

Not giving too much away, but as you have mentioned I am Home and Away’s biggest fan and have not missed an episode since the show first aired back in 1988. It was definitely a thrill to meet actor Ray Meagher, one of the series longest running members who plays the character of Alf Stewart. The producers wrote a scene especially for me and it is exclusive to the production. Within the show, I talk about how I have written a character called Clare – my middle name – and how I have written several accompanying scripts for the show. With the help of the audience, you may just experience one of these scripts come to life. To be part of the cast of Home and Away, that particular dream is still on the bucket list, but it has inspired a career on stage. I feel over the years I have helped break down stereotypes and given a voice to people with disabilities.

The cast consists of yourself, Joshua Bott, Patrick Carter, Tina Fielding, Mark Junor, Melissa Junor and Lauren Marchbank, who will contribute their own experiences and day to day realities with monologues, video, scenes, dance and song. How have you worked together to realise the show?

I have known these cast members for a number of years. I first interviewed Lauren, Patrick, and Tina through DADAA’s (Disability in the Arts, Disadvantage in the Arts Australia) digital dialogues program, researching other Down syndrome experiences to find out what love meant to them in their lives.  I came up with a series of questions: Can you tell me what love means to you? Do you think love and sex go together? Where do you find love? Does the world need more love? These interviews became part of a short film called ‘Finding Love’. A grant from the Australia Council for the Arts gave me the opportunity to collaborate on the writing and workshopping of this work with playwright Finn O’Branagáin. Then an opportune meeting with former Perth Festival artistic director Wendy Martin led to meeting with Clare Watson, former artistic director of Black Swan State Theatre Company, where I talked about my dream of making a show. More creative development workshops happened with Lauren and Joshua and this evolved into a Perth Festival, Black Swan, DADAA co-production for Perth Festival in 2018.

Through my training, I do a lot of workshops that help people to get their voices heard. I have learnt a goal-setting map method that I have used personally to achieve my dreams.

You’re an award-winning actor, public speaker and ABC’s first TV host living with Down syndrome committed to calling for better representation on stage and screen. What has this journey involved so far?

I am a pioneer in Western Australia’s arts and disability community, which is shown by the fact that You Know We Belong Together brought together three of the state’s key arts organisations to co-produce a story of love, belonging and acceptance. The production was the furthest any DADAA artist had come in terms of reaching a mainstream audience. I now have individualised funding and continue to be supported by DADAA and my community to continue professional development opportunities making a showreel, working with mentor/s to develop new work and helping me to write and present at conferences such as Meeting Place.

I feel that the broader Australian community need to learn more about Down syndrome and other ways of living and to value and celebrate what it means to give birth to a Down syndrome baby.  There are countries like Iceland and Denmark with zero Down syndrome births. Parents are being given the wrong information.  I don’t want to live in a society that is not empathetic to having Down syndrome babies as part of its makeup.

As part of my research for the play we looked at the back history of Down syndrome and how people were treated in two hospitals in Fremantle and Claremont, which were only shut down just before I was born in 1980.

It was very sad. They had new-born babies with Down syndrome, that they let starve to death. Headphones to electric shock their brains. When the parents decide to give their baby up, they put them in the Fremantle asylum where they all lived together in one place. So they were locked up.

It still makes me upset. It’s in the past but I don’t want it to happen ever again!

I’ve included these facts in the play and my values and feelings were expressed in the play.

Believe in yourself and your community.  NEVER GIVE UP. I love being Down syndrome and I love my Down syndrome community. The arts can let everyone know they can make a difference in this world to make it a better place for all of us to live in.

Director Clare Watson says “While this is a play about Down syndrome that calls with no uncertainty for inclusivity, understanding and better representation of disability on screen, it is also a completely universal story about love, about loss, about family and about friendships”.

What would you like audiences to take away from the show?

I feel that the play has created and shown a community around myself and my fellow cast members that also includes the audience. This idea that you know we belong together, is the opening line of the Home and Away theme song, but it also has the resonance of a community being built. It was the idea of community and family that captivated myself when I started watching the show. In studying the history of people living with Down syndrome and other disabilities I believe I have shown an audience, and the world, that all people deserve ‘a quality life’. This is the key message I would like audiences to take away after seeing us perform.

You Know We Belong Together will show from Friday 18th until Sunday 20th August 2022 at the Southbank Centre, Purcell Rooms. To find out more about the production, visit here…