In what is a very significant time in terms of examining Black history and World history, it’s incredibly important to learn of the perspectives of those oppressed. During the height of the European expansion of empire, Britain established their intentions to also own parts of the world, the East India Company a strand of their colonial ambitions that would see them overthrow and uproot various nations in Asia before seeking domain across continents. During a voyage to South Asia in 1607, a crew of sailors on board the Matthew ship stopped off in Sierra Leone, the interaction recorded within a ship’s log, and one that involved the crew performing Shakespeare’s Hamlet – a questionable gesture that would play a part in their strategic ploy to colonise Africa. 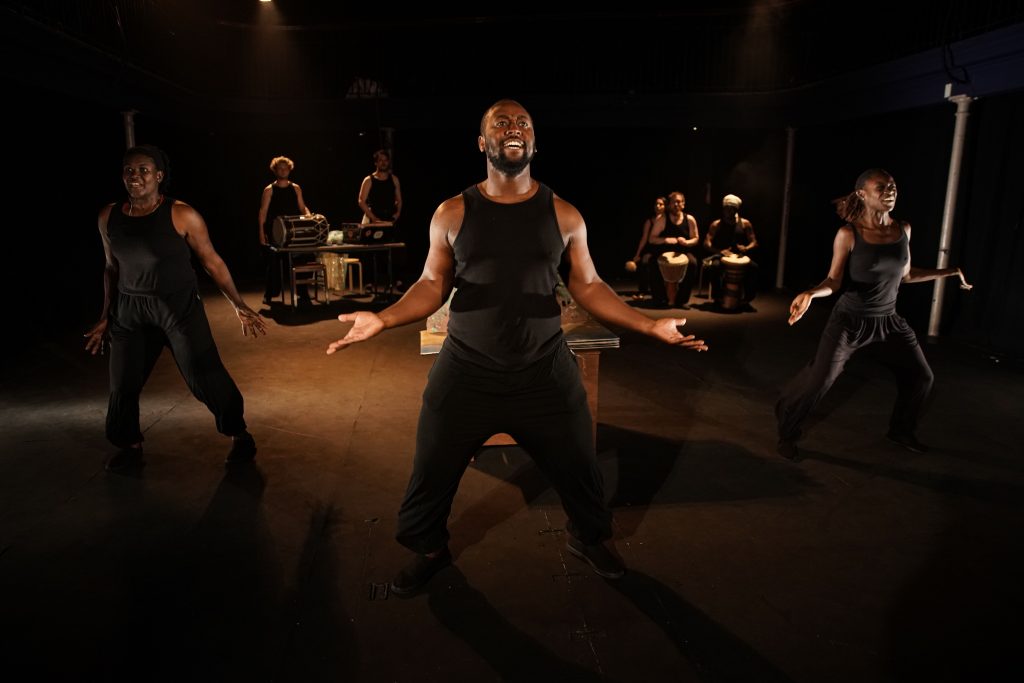 A combination of Britain’s gradual take over of Asia, and their impromptu stop off in Sierra Leone, Rex Obano’s The Hamlet Voyage attentively provides a historical view of what would become the precursor of the Atlantic slave trade’s sinister beginnings. Director Ben Prusiner honouring the African storytelling tradition and making the evening about the beauty of Sierra Leone. The ensemble brilliantly work together to combine the evening’s elements of traditional song, folklore, African drumming, dance and physical theatre, but equally standing out individually to bring the history books to life and give us, in 2022, a perspective of the individuals involved in this dark period within history.

Reference to Portuguese rule of Sierra Leone is made clear throughout, interactions between the British and Sierra Leonians carefully explored in light of the obvious language barrier – Portuguese the language that connects both parties. Obano’s use of classical language is admirable and ambitious and will especially be enjoyed by fans of this type of text, his lyrical language and metaphorical folklore adding depth to this fictionalised telling. Eliot Giurcalarocca‘s William Keeling, the British fleet’s commander meticulous, Adam Scott Rowley‘s second in command cunning, Danaan McAleer‘s Edmund Buckbury and Joe Feeney‘s George King a non-assuming, rebellious duo. Ray Sesay‘s Prince Kpana proud yet naive, Ayodele Scott’s Lucas Fernandes, the Prince’s aid, incredibly wise, Pauline Babula‘s Adama warm and strong, Marième Diouf, Prince Kpana’s love interest vivacious and Natali Servat‘s Nur Mahal regal, tying Southern Asia to this global historical event. The Hamlet Voyage is a necessary watch, one educating all on a period of Black history that still has a large impact today.

The Hamlet Voyage is currently showing until Saturday 23rd July 2022 at the Bridewell Theatre. To find out more about the production, visit here…

For our interview with Rex Obano, visit here…