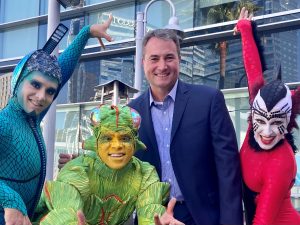 Marking a 17 year journey so far, Cirque du Soleil’s Corteo, meaning a solemn procession, especially a funeral in Italian, makes a welcome return. Known typically for staging their productions at the Royal Albert Hall, the production will call the O2 home from the 13th to 17th July, bringing with them their trademark fusion of acrobatics and spectacle. Sadly forced to close in 2020 in response to the pandemic, Corteo up until that point had been enjoyed by over 9 million fans across 20 countries and 4 continents, this a testament to the show’s popularity. Working to ensure the tour post Covid runs smoothly, President of Cirque du Soleil’s Touring Shows Division Mike Newquist has seen the company through their toughest period so far, ensuring that their current UK, Ireland and International tour can once again be enjoyed by both loyal fans and newcomers alike. He tells us more about what his role involves, how the company have responded during and post pandemic and what audiences can expect from the show!

Hi Mike, Cirque du Soleil’s production of Corteo will premiere in London at the O2 tonight. How are you feeling?

I’m very excited to be here, we had such a successful run at the Royal Albert Hall with Luzia earlier on in the year, so to be back here at the O2 and to see the response that we’ve had from the fans is so overwhelming! It’ll be a fun 8 shows here.

Corteo, which translates as ‘cortege’ (a solemn procession, especially for a funeral) in Italian is a joyous procession, a festive parade imagined by a clown, which promises fun, comedy and spontaneity. What can audiences expect from the show?

They will expect to be entertained, they’ll see acrobatics like they haven’t seen before, they’ll see comedy, a live festive parade! An an uplifting, fun show for the fans to see and it’s a show that’s really for everyone! That’s what’s so wonderful about our performances, families come out and enjoy it and feel a part of the show.

Corteo originally debuted in Montreal in April 2005, before being transformed into an arena show in 2018 – the show so far having been enjoyed by over 9 million people in 20 countries over 4 continents. What has the reception been towards the show? How do these stats help to inform next steps?

As we were looking at re-launching, this was a show that right from the start we had to bring back! Just talking through those numbers, we’ve sold that many tickets, you know that the show resonates well with the fans and it’s really upheld those expectations of what we thought, of what we expected it would do. Coming out of Covid, you talk to folks in entertainment and numbers might be down in some places, we’re seeing that fans are still very interested in seeing Cirque du Soleil, it’s the 1 or 2 shows that if they’re going out, they’re coming out to see so the performances have been right at our expectations so far!

The production was postponed in 2020 due to the impact of the pandemic. What did this period in time look like for Cirque du Soleil?

It was our most trying time in the history of the company. When you go from having tours all over the world, to stopping, to then laying people off, is devastating. We at the time had laid off 95% of the entire company which is brutal, so then to come through this, right now we’ll have 8 tours back on the road, we’re getting there, it’s been a slow process. We were deliberate about not putting all 8 tours out at the exact same time, so we started Alegría in Huston, and then we opened Luzia here. Every couple of months we’ve been rolling out a new show, so it’s been scheduled that way on purpose so that we had time in the studio, so the artists could train, and then we could move the next one out and then bring in another tour to train and then move them out. Our studio time was certainly full, but then to give the market time to adapt, to get all of our technicians back on the road, cast together, it’s been quite the logistical challenge to get these all re-launched from scratch again!

The production is currently on a UK, Ireland and International tour. Post pandemic, how has this shaped how you have constructed the tour?

As we look across the globe, and our tours, and also the Covid restrictions, it’s really hindered where we were able to go. We’re seeing more of a focus on North America and Europe today, so you’ll see more of our shows there than you’d usually have. We’d love for more markets to continue opening up and we’re starting to see that. Before this first year, we’re really focused across North America and Europe and routing these 8 shows around eachother, but within really those 2 markets. We have an arena tour that will move to Autsrailia next year, so you’ll start to see that open up a little bit more, but with the Covid restrictions it’s certainly changed how we route things, we may route 2, 3, 4 years ahead – right now, you start looking 3 or 4 months ahead and it’s constantly changing and we’re tweaking the next couple of years as we learn new data points and look at where we should be going. It’s not the same touring world that we knew before the pandemic.

As president of Cirque’s Touring Shows Division, your role includes operations, logistics and revenue strategy. Can you go into your in more detail?

It’s all of the above, and right now we’re still knee deep in re-launching these shows so a lot of the time is spent routing, which we’ve just talked about and our ticket sales planning, our marketing planning, revenue strategies, operational strategies and the logistical challenges that we have today. Just the increases in cost today in transportation is incredible, you don’t plan for that, you don’t plan for labour shortages, and it’s different in each market we go to and crossing over country borders, so it’s a combination of all of that. Each day includes a part of that, along with our strategic planning as we look out over the next 2 to 3 years, how do we plan the most efficient tours for the company? As we look at our corporate partners and our VIP programmes, and sponsorship opportunities, as we come out of the pandemic, we really look at how we broaden the scope of Cirque du Soleil, so a lot of time is spent there as well so it’s not just the day to day of running of the shows, but also looking across the corporate level, the corporate partners that we’re looking to meet with and that we’re meeting with across all of the different markets, so that’s a part of it. Just looking at really focusing on the growth of Cirque, so it’s not just the operational, that’s a part of it, but really where’s the growth of our company coming from? No day is the same for sure, and you know, when the variant came out at around Christmas time, you start seeing cases rise and you have to cancel some shows, and just when we’re just getting started, but fortunately it wasn’t many and here we we’re able to move right through. We have such an amazing team, each tour has roughly about 100 people on tour, so each of those 100, times 8 tours will roll up and we have a great team managing each tour so it’s a lot of fun!

Just the enjoyment! Come out for date night, come out with your families, there’s so much going on in our world that to be able to escape for 2 hours and just laugh and watch in amazement, I love just looking around at the audience and seeing the fans or the children and see jaws drop when they see some of our acrobatics and watching them laugh at certain scenes. To come out and enjoy a great night out, bring your friends, bring your colleagues, Cirque is back! That’s the biggest thing that we want the audiences to know, as we were re-launching there was still that hesitation but know we’ve seen the success we had at the Royal Albert Hall, in Montreal, Toronto, Vancouver – we were selling 200,000 tickets in each market and those are incredible numbers, Cirque is back! We will be bringing tours near everyone, so we’d love to see them there!

Cirque du Soleil’s Corteo premiered from Wednesday 13th until Sunday 17th July 2022 at the O2 Arena. The show is currently on a UK, Ireland and International tour, to find out more about future dates, visit here…

For our review of Corteo, visit here…

« Previous post
NEW DIORAMA THEATRE ANNOUNCES AUTUMN 2022: A RADICAL ARTIST INTERVENTION THROUGH A SEASON OF NO SHOWS
Next post »
Give Me the Sun @ Blue Elephant Theatre Review