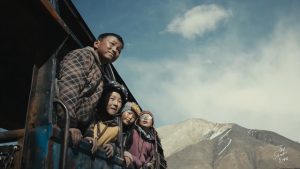 One of the world’s most famous mountain ranges, the Himalayas – which homes the world’s highest peak, Mount Everest, is one of our greatest wonders. A natural structure that inspires awe, it’s clear to see why this makes an intriguing backdrop for a motion picture, writer and director Suman Sen presenting The Silent Echo, a story about four children who play on a burnt-out mini-bus on land that only indigenous locals can cross, with what occurs next changing their lives. Having recently won ‘Best Short Film’ at the Raindance Film Festival and now eligible to be considered for a 2023 Academy Award, Suman tells us more about this thoughtful watch.

Hi Suman, your short film The Silent Echo has qualified to be considered for the 2023 Academy Awards. How are you feeling?

It feels amazing. Just getting the badge of qualification itself is a huge honour. I do not think much about the future. I live very much in today and I cherish every moment of ‘now’. So, I am feeling excited and responsible at the same time.

The Silent Echo shares a story of four children playing on a burnt-out mini-bus on land that only indigenous locals can cross, with what occurs next changing their lives. What inspired you to explore this narrative further?

There is no direct inspiration as such. I follow cultures and people around length and breadth of the country and a few parts of the world too. I love meeting new people, understanding their life. I am a mountain person and for some reason I have a biased belief that whatever innocence is left in the world it’s there in the mountains. Maybe because mountain makes you to stay humble. For that matter nature makes you do the same too.

I live in Mumbai, the western part of India. The monsoon here is gorgeously destructive. I live on a higher floor and the rooms facing the direction of the sea. A direct ghastly sea wind passes through my rooms, for which it gets difficult to keep the glass windows open, especially on the rainy season. Even if you try to open a little, a whistling sound creates a very eerie atmospheric feel. If you really want me to pick any inspiration, I think this is the incident from where I started conceiving the story.

The Silent Echo is a story about unfulfilled dreams, underlying emotions, unspoken despair. It is about the way we see the world and the way nature sees us. It is about the overburdening and irrelevant distinction we make on ourselves without even realizing how insignificant we are.

The film recently won ‘Best Short Film’ at the Raindance Film Festival and can currently be seen at the prestigious Indian Film Festival of Melbourne. How have you found showcasing your film around the film circuit? What has the feedback been towards it?

It happened accidentally and organically. We didn’t design anything.

Response has been great so far. I am getting very positive reviews and feedback from across the world. We haven’t had any official release so far but maybe around early next year we will try to release it on any online platform so it reaches a larger audience.

The film has been written and directed by yourself, with the support of producers Dominique Welinski, Ram Krishna Pokharel, and duo Arifur Rahman and Bijon, cinematography by Xoaher Musavvir and music by Mayukh and Moinak. How have you all worked together to realise the film?

I shot the film in the most extreme part of North-Western Nepal, close to the Tibetan border, in a language unknown to me. I was in the lap of the beautiful yet unforgiving Himalayan ranges where the terrain and weather are equally challenging. It was average -10 degrees temperature with a constant nagging ghastly wind on top of the mountain. Thankfully we could finish the principal photography of the film, right before the pandemic crippled the world, around February 2020.

Finding the location took us weeks. The production wouldn’t have been possible without the constant support my Nepali producer. I am usually very picky about all the elements of the film, especially the location. I developed the original idea to a screenplay and shared it with my producers around late 2019. We started hatching it out since then. The idea was not to do something pretentious and preachy. It tooka month a craft the final script. The production of the film was really a humbling experience for meand a little overwhelmingtoo. A story that I conceived in the confines of my room, to see it getting a life – it felt magical.

For the film, I travelled from across the Himalayan range for more than a month.  I am fortunate to have collaborators from across the globe from Bangladesh, Paris, Nepal, Sweden, Lebanon, who have come together to make this film happen. It was really like a celebration of life through stories.

In short, it taught me to be humbler.

I do not want to set any expectation for them. There are a few unexpected moments in the film. Revealing that might spoil the unexpected and surprising moments. I want them to get immersed and get lost in those micro moments.

Honestly, I don’t want to determine the ‘take aways’ beforehand. You cannot enforce a mandate on a film. It overburdens the joy of witnessing an experience. I will let the audience decide that, if at all there is any.

To find out more about The silent Echo, visit here…