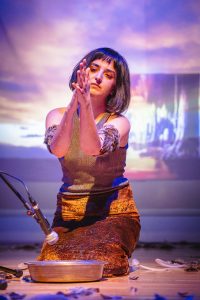 Founded a decade ago in 2012 to platform the work of marginalised artists, performance venue Ugly Duck, located in Bermondsey – South East London, has been at the forefront of working with performance artists who are not afraid of exploring lesser talked about themes. Their @Disturbance Festival, now in its 4th year specifically created to showcase LGBTQ+ artists and stories. Set to show a multi-sensory, immersive work referencing the mythological creature the Bittern bird as part of Ugly Duck’s 10th year anniversary on the 10th,11th and 12th of November, performance artist Gisou Golshani tells us more about how they’ve approached creating the piece, what they’ve learned along the creative process and what the audience can expect!

Hi Gisou, you’ll be taking part in Ugly Duck’s @Disturbance Festival from 10th to 12th November. How are you feeling ahead of the event?

This is my first residency and I’ve really enjoyed taking the time to explore my ideas and engage in in-depth conversations with other queer creatives and professionals. Really excited to bring this project to life!

You’ll be showcasing a multi-sensory, immersive performance and installation via ritualistic movement visuals and sound – with references to the Bittern bird. What has inspired the creation of your piece?

I’ve been researching the notion of melancholia for the past two years in my practice. At the time I was watching a lot of films from pre-Islamic revolution Iranian cinema that were banned after the revolution, specifically films by Bahram Beyzaei. And I got interested in how they would address social issues indirectly and symbolically. So I started researching Persian symbolism and came across the story of a semi-mythical bird called the Bittern. In Persian mythology animals take on human characteristics and offer an insight into the human world. This is often through quite a binary lens, and the characteristics are either praised or looked down upon. In the case of the Bittern the melancholy is looked down upon, and I felt like challenging this view on melancholia through an audio-visual performance.

One thing to note about the story of the Bittern, is that the bird is described to refrain from drinking water from lakes and swamps it lives in, fearing that it will cause drought. So a very important element in my performance is water, as a resource that has been used to the point of exhaustion by the Islamic government in my country Iran. So I watched a lot of documentaries about how different lakes and swamps in Iran went dry. I sampled sounds from them and edited footage of the documentaries in the video that accompanies the performance. Through the movement and ritualistic washing rituals I do, I try to talk about how water has been disrespected, and say that this might be one of the reasons the bittern is melancholic, because she sees how the mismanagement of water is causing threat to different lifeforms and making living in dry areas of Iran impossible.

I feel so glad to be part of Disturbance and their diverse and radical programme of live art. There aren’t many other programmes highlighting queer video and performance art like Disturbance.

I learnt that sometimes a project has so many elements to uncover, and this can take time. I performed this piece in March this year and have been experimenting with different ideas around the same subject since. I am still coming up with ideas on how to do things differently. As an artist you can feel pressured to constantly come up with new ideas and make new work. I say why not recycle and rework old ideas into new work?

I hope that the audience will feel inspired to enter a space of introspection, to reflect on the abstract and symbolic elements of the performance and make their own interpretations of them. If you come to the showcase, I look forward to chatting about the piece with you!