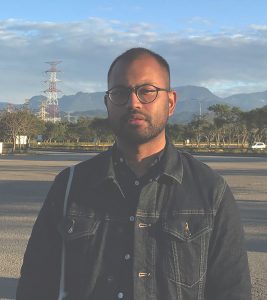 Founded a decade ago in 2012 to platform the work of marginalised artists, performance venue Ugly Duck, located in Bermondsey – South East London, has been at the forefront of working with performance artists who are not afraid of exploring lesser talked about themes. Their @Disturbance Festival, now in its 4th year specifically created to showcase LGBTQ+ artists and stories. Set to show Buah Dahsyat (Fantastic Fruits), a short film exploring strategies of resourcefulness for survival in environments under surveillance as part of Ugly Duck’s 10th year anniversary on the 10th,11th and 12th of November, artist Khairullah Rahim tells us more about what it means to form part of Ugly Duck’s 10th year anniversary, what inspired him to create Buah Dahsyat and what the audience can expect!

Hi Khairullah, you’ll be taking part in Ugly Duck’s @Disturbance Festival from 10th to 12th November. How are you feeling ahead of the event?

I am delighted to be included in this year’s edition of @Disturbance Festival in London. There is always a sense of excitement knowing when a work gets an opportunity to expand its outreach beyond the initial intended audiences. Buah Dahsyat (Fantastic Fruits) was originally commissioned as a response piece to the neighbourhood of Boon Lay in Singapore, produced under the Folk-Lor project led by Darren Guo and Euginia Tan, with community partner, 3Pumpkins (Tak Takut Kids Club). It is heartening to know there are opportunities and genuine interest in experimental content and narratives around my community.

You’ll be showcasing Buah Dahsyat (Fantastic Fruits), a short film exploring strategies of resourcefulness for survival in environments under surveillance. What has inspired the creation of your piece?

Buah Dahsyat is part of an ongoing research which looks into the politics of appearance(s) and demeanour, specifically in considering the intertwining relationships between objects, bodies, community and safety as a branching point. The research is an intimate examination of the veiled lived experiences in my neighbourhood in Singapore, Boon Lay, where a large fraction of the residents consists predominantly of the working-class demographic — the ageing population, blue-collar migrant workers and foreign students amongst others. The neighbourhood is also known for reporting high(er) numbers in organised crime activities. Here, surveillance is glaringly heightened and the maintaining balance between visibility, security and privacy is oen precarious.

Enigmatic fruits acting as multifarious symbols for intersecting themes including everyday rituals, desire, social mobility and labour appear constantly in the film. In a sense, these fruits also hint to bring about discussion on immediate social issues affecting folks in the neighbourhood. Who gets to harbour dreams and aspirations? Is the idea of meritocracy a myth? Are we helpless or are we made to feel helpless? These are just some of the prompts which I keep returning to in the process of making the film.

There were clear limitations with access to resources such as filming equipment and editing soware to make Buah Dahsyat. To overcome this, I turned to what I have readily available around me — footage was shot from the phone and subtitles were imported as green screens created using Keynote software.

This poor footages became literal translations echoing the lived experiences of poor folks. But this seemingly sloppy act of troubleshooting also illustrates a kind of ingenuity to turn problems into its very own solution.

Conceptually, I was very intrigued with sheen, reflection and refraction. In the work, this fascination with resistance to light (visibility and surveillance) is mostly explored through the use of fruits made of synthetic materials, some even further with the embellishment of inexpensive rhinestones. This is a commentary on how our appearances and demeanour can deceive when they are not examined deeper. Light is also another element heavily discussed in my work. While many associate notions of light closely with safety and positivity, there are also lights which illuminate more intensely on some than others. Perhaps hyper-visibility then may also be subverted back into strategies for disadvantaged communities by functioning to repel and shield as they become diversionary tactics instead of disclosing and outing. The sheen and dazzling characteristics of the fruits featured in the film are unassumingly tactical, bringing much more attention to its garishness and beauty while simultaneously acting as a decoy, masking its true identity.

As I have mentioned earlier, this opportunity is truly dear to me. One of the highlights of making this film was the fact that I got the chance to work with people I consider my comrades. The sound element of Buah Dahsyat was designed by berukera, someone I truly consider a genius in this field of experimental media and have previously collaborated with in several of my other films. I am also so thrilled that I finally got the right project to work with the amazing queen, Luna Thicc, who was the voice in/of the film. She literally transformed into this invisible commanding voice of wisdom anchoring the film; like a teacher or elder. These collaborative efforts were only possible because of the shared trust we have with each other. To be recognised and selected as one of the artists for @Disturbance not only gives me a sense of validation, but perhaps more importantly the affirmation to continue pushing my own boundaries within my practice.

What can audiences expect and take away from your piece?

There is a lot to take in or even break down. As they repeatedly engage with the work, they might also discover fresh perspectives and other debate starters. For far too long, the term “audience” has always been a point of serious discussion for me when presenting work. Most times, there is this presumption that the audience denotes a singular term. However, I recognise that this is rarely the case. I would like to believe that my audiences are broad and wide. I hope they will allow themselves to have fun with it 🙂