It’s back and better than ever: VAULT Festival, the UK’s leading independent festival of live performance, makes its joyful return in 2023. Running from 24th January – 19th March 2023 in venues across Waterloo, the programme features over 500 of the best theatre, comedy, cabaret and late-night shows from some of the brightest talents across the live performance industry. 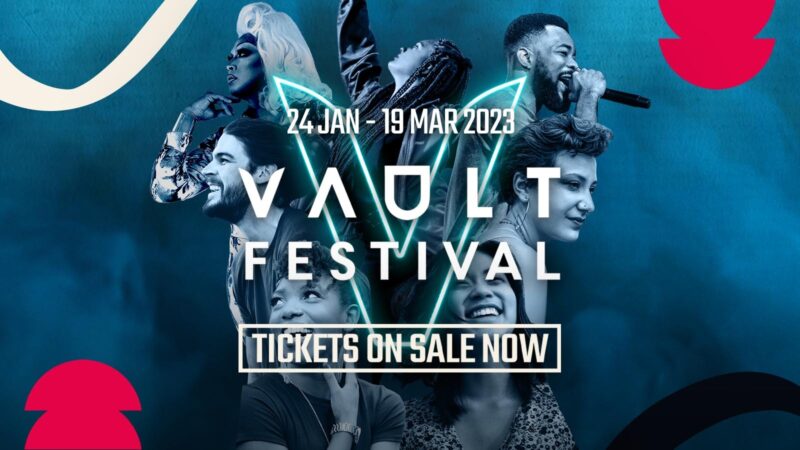 VAULT Festival Director & Co-Founder Andy George comments, It’s been a tumultuous few years for us and our artists. There have been many times when the story of VAULT Festival could have ended. But through those challenging moments we kept believing in the idea; that VAULT Festival can affect positive change in our world through joy and creativity. Our resolve has been pushed to the limit. But we’re back. And we can’t wait to share these fantastic artists and shows with everyone!

Alongside the renowned programme of thrilling live theatre and performance, VAULT Comedy Festival is the first chance to see fresh material from more established comics and debut performances from the next generation of comedic talent. Brand new for 2023 will be The Flair Ground, a purpose-built venue featuring the finest imaginations in cabaret, drag, burlesque, circus and performance art talent.
The theme of reclaiming joy runs throughout VAULT Festival this year, considering how we hold onto beauty in bleak circumstances. This is especially seen in the work of the VAULT Five artists, live performance makers in VAULT Festival’s mentoring programme. Tatenda Shamiso’s NO ID is inspired by the bureaucracy of transitioning, speaking both to the unjust difficulties and the unadulterated joy that comes from embracing queerness. Time from Being human reclaims the voices of women over 50 with integrated projection mapping, while Right of Way by Beth Bowden celebrates coastal walks and the connection between land and body.

Identity is explored in Tatenda Matsvai’s Dark Matter, which brings together quantum physics and Zimbabwean myth to reconnect and reconcile with one woman’s past, and Walking Cats, transports its audience to Kilburn and China simultaneously in a tale of homesickness and migrant identity. Shortlisted for the Charlie Hartill award and the Les Enfants Terribles Award, It’s A Motherf*cking Pleasure explores how blindness can be exploited by the entertainment industry, Gig theatre piece The Phase brings catchy pop punk to an oppressive school setting, and geopolitical circumstances are studied with a queer lens in true story Borders, where a Lebanese man and an Israeli meet on Grindr.

Physical storytelling comes to life in Incognito Theatre’s Net Kill, exploring the story of a five-man badminton team sent to vanquish a beast – a show that includes live badminton! One woman show High Steaks highlights labiaplasty in a powerful rebellion against labia-shaming, and Katherine and Pierre marries physical theatre and clowning in a dance routine to the songs of Katy Perry. The moving and immersive experience Theatre of Gulags invites audiences to walk through USSR labour camps and the theatres that were built inside.
VAULT Festival’s Excellence in Sustainability Award winner My Lover Was A Salmon in the Climate Apocalypse brings the climate revolution to the forefront of gig theatre after a successful run at 2022’s Edinburgh Fringe. Caligula and the Sea by VAULT Five artist Yuxuan Liu brings magical realism to the decline of the Roman Empire, examining themes of power, friendship, and the environment.

VAULT Festival’s Excellence in Accessibility Award winner Part of the Main bring a trio of captivating tales to this year’s festival – irreverent stand-up special Bloody Mary, the twisting, unsettling tale of The Tinker and All By Myself, a study into isolation and the online world. Familiar faces returning to VAULT Festival include Adam Scott Rowley, James Rowland and Roann McCloskey. Katie Arnstein (It’s A Girl trilogy) brings brand new show The Long Run, exploring the comedy within cancer, and queer-cult sensation In PurSUEt returns to entertain audiences once more with its tale of celebrity obsession and internal battle. Podcasts Beowulf Unbound and Barry McStay’s Worst Foot Forward will record episodes as part of the festival programme.

As part of the wider VAULT Festival, an incredible wrestling ring will be set up for the one-day Wrestling Festival, featuring kickass parenting narrative Mummy Vs, NHSmackdown in collaboration with Sh*t Theatre, and queer cabaret and pro wrestling night Fistclub Vaulterdome. Experience the best and boldest work from the most exciting new voices in VAULT’s Generation V takeover, featuring VAULT Young Company’s Joy, about young people trying to find their joy in a world falling apart, and brand new shows from two of the UK’s leading creative drama schools, East 15 and Fourth Monkey.

VAULT Festival’s family programme will delight and captivate audiences of all ages. Cabababarave sets The Flair Ground alight with some of the finest circus performers entertaining children under two, alongside Edinburgh Fringe hit Science Adventures of the Power Pickle. Around the World With Nelly Bly will captivate young audiences with puppetry, and Blue Badge Bunch educates and entertains, using interactive games to give audiences the experience of understanding what it is like to have different disabilities. Mules bring their out-of-control dance moves to VAULT Comedy Festival’s family programme, and The Suitcase Storytelling Company’s The Girl and the Dragon – highlights the power of stories and kindness to young audiences.

A Londoner, a Dane, a Somali, an American and a Canadian walk into a comedy festival… and present Comix Without Borders. Live at the Apollo’s Sikisa brings a work-in-progress of her second show Words, Edinburgh Fringe Best Newcomer nominee Helen Bauer presents a work-in-progress show of her new thoughts, feelings and emotions on pretty much everything, and Matt Ewans brings new videos and returning favourites to audiences in Tech Experiments.

Taking inspiration from lived experience David Ferguson’s Nice Bum looks at his former experiences as a homeless person through a tragi-comic lens, and Benji Waterstones has turned his experiences as an NHS psychiatrist into You Don’t Have To Be Mad To Work Here, an engaging and entertaining hour of comedy. Dan Kelly tells the true story of trying to run 26.2 miles in the most secretive nation on earth in How I Came Third in the North Korean Marathon, directed by Fringe-favourite Joseph Morpurgo. VAULT Festival’s Excellence in Inclusion Award winner and Dave’s Comedy Awards Panel Prize 2022 winner Best In Class, a crowd-funded, profit-sharing initiative that champions working- class comedians from across the UK, present a night of new comedy hosted by founder Sian Davies.
The Flair Ground at VAULT Festival is where to come for the best, most diverse and exciting nights out in the city. You Shall Not Yass looks at satire and parody to explore queerness on film, hosted by the largest collective of underground drag queens on the circuit including Me The Drag Queen, whilst Sexquisite presents political theatre-cabaret about sex worker rights, based on real life experiences.

Bitten Peach return to VAULT Festival and will light up The Flair Ground with their continued ground-breaking representation of pan-Asian artists, and Matt Ricardo performs his gravity defying juggling show The Extraordinary Gentleman, as seen on Britain’s Got Talent. Brand new collective What’s Good Cabaret focus on conversation for the booty shakin’ generation, whilst black femme queer-led collective Juicebox create an empowering strip club for all to enjoy. Focussing on young and exciting talent that was lost in the last two years, the Clandestine Cabaret fuse projections and burlesque in a technology hybrid, and Uptown Swing bring their live band for a speakeasy like no other.
House of Burlesque present Poli-tits, selling the current bonfire of news from the world we live in with burlesque, cabaret and satire, along with the return of their mega silent disco Glitterball. Rhys’s Pieces and the Queefy Queerdos continue to kick down the door of what drag looks like with their cabaret extravaganza, and get sinning with a cabaret disco dance party to leave you speaking in tongues with feminist, trash-pot party starters Church of Pussy Liquor. Satire cabaret artist Laurie Black also returns for a knees-up around the piano, along with drag king collective Pecs and drag king Brent Wood.

To kick VAULT Festival 2023 off with a bang, VAULT Festival invite you to their Big Birthday Bash to celebrate over a decade of VAULT Festivals. Hosted by Rhys’s Pieces, this night of cabaret and circus asks you to help yourself to birthday cake, visit the glitter station, and bring your party hat!
Head to vaultfestival.com for the full programme and to book your tickets to these must-see shows and many more. Tickets are on sale now. VAULT Festival is back, and promises to light up the cold winter nights of 2023.

VAULT Festival 2023 will take place from Tuesday 24th January until Sunday 19th March 2023. To find out more about the event, visit here…