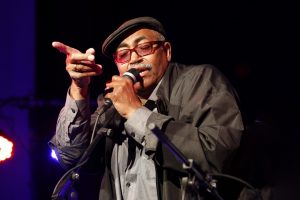 With any musical movement, it takes a community of dedicated musicians to make it thrive. We may hear of particular iconic figures who transcend the form no doubt, but there are technicians and bands of musicians who push genres forward and really help to establish the rhythmic sounds that we grow to love. Celebrating five decades in the music industry, having started life in one of the world’s most influential musical cities – Chicago, legendary musician, writer and publisher LT Beauchamp has really helped to shape the jazz genre, having contributed heavily to Art Ensemble of Chicago’s Certain Blacks’ album in 1970 amongst other feats, and having received the 2016 Reykjavik Blues Society Honorary Membership Award. Performing a musical set with a Q&A segment and other surprises on Friday 17th February as part of cultural organisation, Certain Blacks’ Heroes Festival to be staged at Rich Mix, LT Beauchamp tells us more about what to expect from this very exciting, one off event.

Hi LT Beauchamp, you’ll be performing a musical set on 17th Feb which forms Certain Blacks’ 9th festival titled Heroes at Rich Mix. How are you feeling ahead of the production?

Hello and thank you. I’m feeling enthusiastic about performing and the possibility of extensive interaction with the audience. That means Q&A, audience participation that may include a few dance moves, and a little visceral spontaneity.

Your set will see you backed by a band of high calibre UK musicians led by bass player Miles Danso, and will include you performing a blues fuelled set, followed by readings and a Q & A. How have you found preparing for the performance?

Your musical career spans five decades, having contributed heavily to the Art Ensemble of Chicago’s Certain Blacks’ album in 1970. With Chicago being an influential musical city – boasting stars such as Miles Davis, Duke Ellington, Billie Holliday and Ella Fitzgerald amongst others, your interest in blues music stemmed from your tap dance training as a teen, guided by Afro-Cuban great Jimmy Payne, which would lead onto you recording with Archie Shepp at aged 20. You’d then go onto record with an eclectic, esteemed array of artists and become the recipient of the 2016 Reykjavik Blues Society Honorary Membership Award acknowledging your contribution to jazz music. What does it mean to have contributed heavily to jazz and paved out such an impressive legacy?

I’ve had inspiring people around me from an early age that included people I met through my
dad at his law office in my early teen years. Eddie Thomas, manager of The Impressions; pianist, Ahmad Jamal; and the Sandman of 47th Street were regulars among many. They all, including my father, had a ‘yes we can’ attitude about dealing with life’s trammels. Jimmy Payne became an ‘Elder in Residence’ at the Du Sable Museum of African American History in Chicago. In that role he inspired young people until he was well into his nineties as dancer, storyteller, confidence builder, and much more. Occasionally, I had the pleasure of joining him during his talks with young people. When Archie Shepp invited me and my good friend, Julio Finn, to play harmonica on his album, Blasé, it was a kind of reaffirmation of possibilities if one thinks positive. Also, it meant that Archie Shepp was looking for music possibilities as well as character; and to this day, I stand humbly, admiringly, and grateful to him for his incredible impact on my life and career that began over fifty years ago.

I think ‘legacy’ has a lot to do with who is doing the observing, and how broad or restricted
their thinking is, as well as their ability to make their opinions known. I appreciate your use of
the term when speaking about my cultural contributions. I have known absolutely phenomenal creators who were diligent, unswerving in their dedication, and who were beacons in their chosen field, and yet their names are rarely mentioned as legends. In many high school music classes in the US, Josephine Baker, Nina Simone, Charlie Parker, Ben Webster, Miles Davis, and so many others are rarely mentioned as legends, if they are mentioned at all. Every now and then some self-serving organization comes into existence to get its name itched in history by arbitrarily giving out awards to almost anyone who acquiesces to whatever they are claiming to be their ‘Statement of Purpose’ then just as quicky, they fade away. Chicago has had numerous over the years. So much for meaningful legacy acknowledgement. There are stalwart organizations like the Reykjavik Blues Society that have for decades invited Blues artists and elders to festivals and tours, as well as those who carry the torch of Blues out of love and respect for those who are the bedrock. And to the Reykjavik Blues Society, I am appreciative of our relationship that began in 1991, when I was introduced to its founder, Halldor Bragason, while looking for a book printer in Iceland.

Certain Blacks is renowned for supporting marginalized artists and giving performers the platform to showcase their work. What does it mean to form their ninth year?

Certain Blacks is one of those non-nonsense, dedicated stalwart organizations that I was thinking about in your previous question. Clive Lyttle and his team exemplify what it means to be an arts organization that focuses on truth through performance and excellence, as well as providing a platform for a wide range of creative possibilities.

No matter how many times I do a show, it’s always a learning experience to interact with other musicians when a note has yet to be played. And so, by just speaking we learn a lot about each other’s styles, direction, creative experiences and more.

I like to be serious, and I like to have fun. Big fun. And people in the audience may have different expectations, we’ll see how it goes. Could be a boogie ‘til you drop night.

LT Beauchamp will perform as part of this year’s Certain Blacks ‘Heroes’ Festival on Friday 17th February 2023. To find out more about the show, visit here…