Amidst the various showcases of new fashion collections by well known designers at this years recent London Fashion Week, there was only one individual that everybody was talking about, and that was Naomi Campbell. Speaking out about the elitism within the fashion industry, the successful model criticised the industry’s lack of diversity, citing that there was only a low percentage of black and asian models represented on the catwalk. 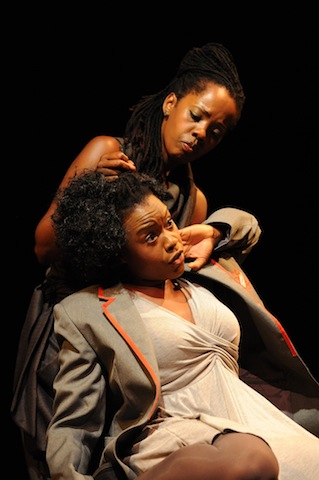 Written by Somalia Seaton, Crowning Glory questions the concept of beauty within the Western World, and reflects upon the thoughts and feelings of Black British females as they find themselves forever contending with mainstream ideals. Performed by an ensemble of seven actresses, Seaton’s honest and observant dialogue highlights the complex relationship between culture, identity and race through the aesthetic of different hairstyles. The cast deliver engaging and poetic phrases with heart and gravitas, from Toyin Ayedun-Alase‘s fiery, yet vulnerable speech as Pickyead, to T’Nia Miller‘s thoughtful and liberating speech as Bal-ead.  Nick Barnes’ visually striking stage design of slanted levels creates a powerful backdrop for the ensemble to work together as a chorus as well as individually for their monologues. The piece looks to start a conversation, and this is cleverly reflected within the projections integrated within the play. Video clips of the public answering a series of questions on how they view themselves add an air of authenticity. Dawn Reid‘s direction is playful, yet poignant from the cast depicting comical mannequin heads in a hair shop during Lorna Brown‘s intelligent and bold speech as Panther, to Sheri-An Davis‘ versatility portraying both a child and a parent in a traditional Caribbean household. 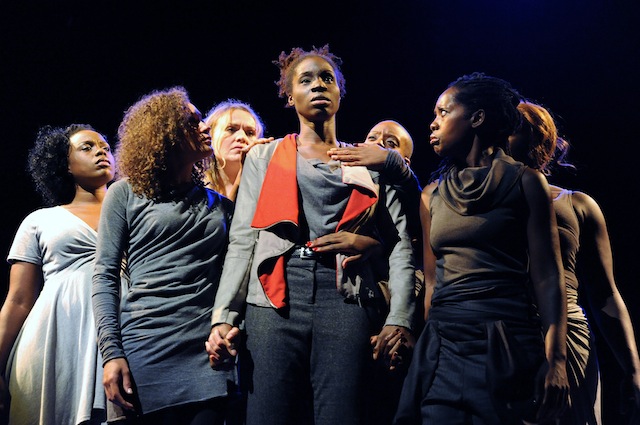 Somalia Seaton’s poetic piece is bold and insightful, highlighting a refreshing range of voices on a topic that usually only ever depicts one perspective. 4/5