‘No Bell is like no interest. Not interested. Don’t care-don’t wanna know.’ Elayne constantly finds herself subject to commentary by by those around her, each person thinking they know best. However all she wants is to be left alone and to shut out the outside world around her. 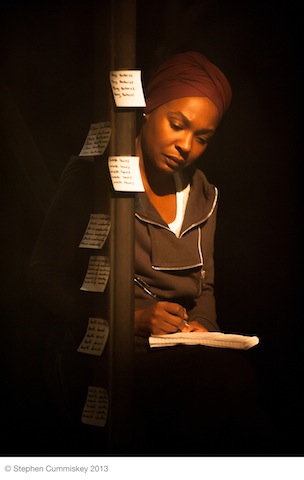 Written and directed by Debbie Tucker Green, the dialogue was sharp, witty and direct as characters competed against one another for their opinions to take prominence, overlapping each others sentences in an attempt to be heard. Elayne lives a reclusive life at home, she fills her days with compiling numerous lists, conversations with Aimee, Devon and Trey and on a rare occasion, a visit from her sister. Nadine Marshall‘s portrayal of Elayne was quick witted yet vulnerable as she found herself hesitantly competing for affirmation from Sophie Stanton‘s fearless Aimee and Anthony Welsh‘s self assured Devon, resulting in Elayne receiving various cigarette burns on her arm in order to fit in. This was contrasted with scenes of her sister, and her sister’s ex husband, as the production displayed the rippling effect of Elayne’s suspected mental illness within the family, and how they all attempted to avoid the subject matter. Brought together by Lisa Marie Hall‘s striking and bold climbing frame-esque staging, characters moved around Elayne’s chaotic and messy household, cleverly using the staging as a coat rack, adding to the chaotic visual. A subtle yet poignant look at the rippling effect of mental illness within a family. 4/5.