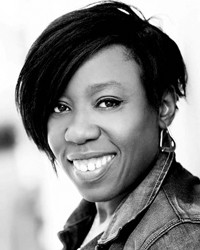 Many of you may recognise Chizzy Akudolu as Mo Effanga from the BBC’s BAFTA award winning drama, Holby City. In between her busy filming schedule, Chizzy is also a keen writer/producer and Creative Associate for TriForce Promotions. Ahead of Nov. 4th Monologue Slam event, I got the chance to talk to Chizzy about turning Host for the evening, the importance of Monologue Slam within the acting industry and the importance of honing your craft!

How do you feel about tonight?

I am buzzing, I am nervous, I’m excited, all those things! I can’t wait! I’ve always wanted to host Monologue Slam. I’ve always joked that one day, maybe Jimmy will be really late and I’ll get to do it… Well, (currently) he’s on stage, he’s teching  (For the Island at the Young Vic), so he said, yeah, cheers, do you want to do it? And I was like, yeah! I need to prepare! I’m excited; I’m looking forward to it!

So how did you find out about TriForce Promotions?

I’ve been friends with Jimmy and Fraser for about 10 years now, and they have had TriForce for about that time. They once said to me, because I wrote a play called The Rec Room, they would like to help produce it. So we did a couple of rehearsed readings at Soho Theatre, and we were going to put it on at the Lost Theatre. We’re still trying to pitch it, and put it on as it’s quite a big production. I’ve been friends with them for a while, and they said to me, would you like to come on board as a Creative Associate, I’m no good at the behind the scene stuff, the organisation. I’m just good at writing, so that’s my contribution.

What does being a Creative Associate entail?

Anything that is writing really, we’ve produced 2 short films together. I’ve got a production company myself, and basically being at events like this and helping in anyway I can. When Jimmy is hosting, usually I’m talking to the VIP’s, getting them to do interviews.

How important do you think Monologue Slam is to actors, aspiring performers within the industry? Do you feel it is changing the industry?

I think Monologue Slam is so important, I did a monologue once back in 2009 and one of the judges was Liz Stoll, who casts Holby City. Now 2/3 years later, I’m on Holby City. I can’t say it was directly from her seeing me in this, but I’m sure she remembered me, because the thing about Monologue Slam is people do remember you, it’s a way of getting into the industry. Not so much a shortcut, because you have to be good, you have to audition to get on, but it’s a way of getting yourself in front of people you wouldn’t normally get in front of. I think it’s incredible, it’s amazing and it’s got bigger and bigger and bigger, and it can only get bigger if it’s better. I’d say to any actor who wants to get on, to come and do this.

What advice would you give those performing tonight, and to any aspiring performers?

For performers performing tonight, if this is your first time, I know what you’re feeling! I know right now you’re going; oh my God…I’m going to mess up… this is so frightening! And it is, it is so frightening, probably one of the most frightening things I have ever done. But once you’re on stage that just goes! You just don’t want it to end! It’s one of the best experiences, it’s like you’re throwing yourself in at the deep end and I think that’s brave. You’re not only in front of Casting Directors, you’re also in front of your peers, it’s just you and your monologue so make sure you know your monologue inside out. Make sure you know your character. If you mess up, don’t worry about it, just carry on, the audience is very forgiving. It’s a lovely crowd.

Do people come up to you for advice? What has the reaction been towards Monologue Slam?

People always come up, and I think that’s lovely. It always surprises me because somebody said to me just now can I run my monologue for you because you’re an established actress. You kind of think to yourself, I don’t really see myself as that, I just see myself as the same person who started off as an extra, loved what I was doing, got more and more creative and learned more about the industry, and ok I’m in Holby City now, but I don’t see myself where other people see me which is really strange. We’ve just come back from LA, and one of the key pieces of advice we were given was, go to classes, always be in class! If you’re not working for 6 months, what are you doing? You’re not honing your craft, and we lose that muscle. So, find a class you like, and get a good headshot. Do student films, unpaid films, independent films. Why not get the student films, put it altogether and get a show reel. 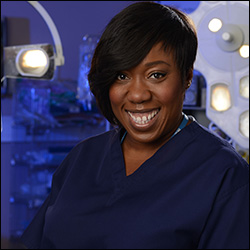 So how is it working on Holby?

I love it, I loved working with Jimmy, he’s one of my closest friends and it was really sad to see him go, there was a real energy shift. Everyone’s great at Holby, we’re a real family, people get on, it’s fantastic. There isn’t a feeling of preciousness, no one’s trying to get one up on each other, we all just love our characters, we love the show and we’re interested in making the show a success.

And finally, what is the future of TriForce Promotions?

Having known Jimmy, Fraser and Minnie for as long as I’ve known them, I see TriForce going Global. They won’t stop at just this country; Monologue Slam is just one part of TriForce, which is booming! And the networking parties, they’re always full, it’s a great vibe, you don’t feel like you’re there to network. We’ve got the short film festival in December, that’s at BAFTA now!

« Previous post
From London to Los Angeles, Minnie Crowe speaks to Theatrefullstop about the future of TriForce Promotions!
Next post »
The Emma Packer Show @ The Lord Stanley Review