Cast your mind back to your teenage years… Were you the goody two shoes? The class clown? The clever clogs? The jock? The list goes on and on. At 14 years of age, you’re still trying to make sense of the world; a generation between childhood and adulthood, you’re influenced by the ever evolving roller coaster of playground gossip , forever chasing the holy grail that is decent GCSE results, and constantly being put the test by friendships… 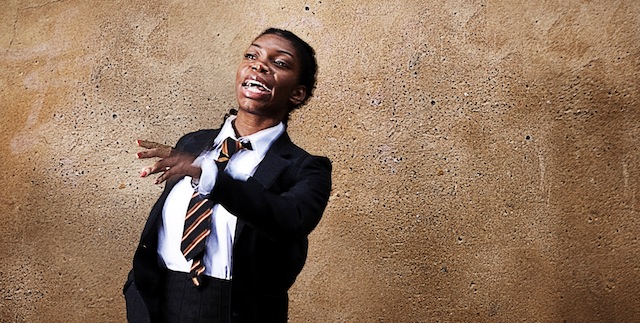 Having just completed a successful run at The Shed with Nick Payne’s pertinent play, Blurred Lines; Michaela Coel makes a welcome return to the theatre with her award winning monologue, Chewing Gum Dreams. Offering an insight into the day to day goings on of Tracy Gordon, a teenager not short on words or opinion; Chewing Gum Dreams is a vivacious yet hard hitting tale of London, told from the prospective of a 14 year old girl.

Forming the introduction to the 45 minute monologue was a seemingly mundane bus journey, which completely uplifted the minimalist staging. Coel’s Tracy Gordon sharply and comically illuminated the setting with her boisterous characterisation, creating moments of laughter with her witty one liners. Coel vividly created a portrait of characters, further adding to the palette of her memoir-esque monologue. A depiction of her friendship with Candice became the heart of the production, however bleakly overshadowed by the intimidating presence of Candice’s boyfriend, Aaron. Humorously portraying Aaron as a bumbling clown figure, this was quickly juxtaposed with Tracy Gordon’s account of a harrowing  encounter with him. A poignant and heartbreaking switch of emotion, displaying Coel’s ability to portray a nuanced character.

From Bus journeys, to the classroom, Coel playfully continued with the convention of switching from character to character, one moment relentlessly trying to keep the attention of a classroom of school kids in a Mathematics lesson, to becoming Fat Lisha, the nonchalant class clown intent on disrupting the lesson with anecdotes and rounds of gossip. The chaotic scenario saw  Tracy Gordon kicked out of the class room for imaginatively answering a mathematical question with the retort, ‘your mum!’, an experience which left her feeling embarrassed by the rest of the class. This was however contrasted later on in the production, as the clash between Tracy and her Mathematics teacher reached a different conclusion; Tracy the spearhead to a protest in which the whole class ask for the teacher to leave.

Another look at Tracy and Candice’s friendship saw Coel creating a vibrant and atmosphere, as the two characters prepared for a night out clubbing, listening to old school garage. Whilst out, the mood was swiftly ruined by the jealous reappearance of Aaron, as he took Candice away. Coel movingly portrayed the breaking down of a friendship, as the character of Tracy tried everything she could to keep it together.

Coel depicted a softer side to Tracy as she described the formation of her relationship with Connor, a boy in which she had had a crush on for ages. A care free and endearing relationship, the scenario was abruptly brought down to earth by Connor’s mother’s decision to put an end to the relationship due to her prejudices. A scene cleverly performed by Coel, as she seamlessly portrayed both characters. Nadia Fall‘s direction was stripped back and honest, whilst Michaela Coel‘s script evoked, alarmed and entertained! 5/5

Chewing Gum Dreams is currently showing at The Shed (National Theatre) until Saturday 5th April. For more information on the production, visit here…