A shy hero. Grizzled older hero that is far more important than he initially seems. Schoolgirls in uncomfortable-to-watch attires. Cyclical storytelling. Your Mother. Pyramid head. A plot that defies expectation and ends comfortably unsatisfyingly. Prophecy.  The good people at Fuel Theatre have just staged a japanese video game, but that description by no means does The Roof justice. 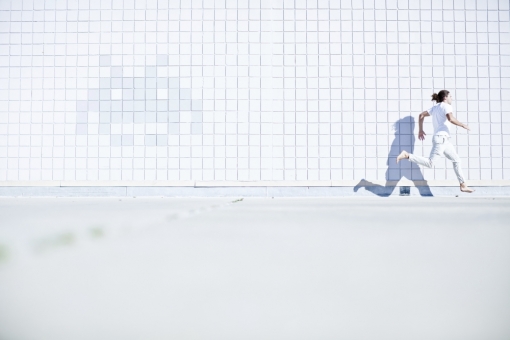 It is as much an experiment in staging as it is a play. A fusion of dancing, free running and music delivered through headphones immerse the audience members in a way that feels at the same time all encompassing and isolating. You are outside on your own with a lot of people around, standing in a pit watching the show go on all around you. The setup is the inverse of a roman gladiator stadium, with the people in the dirt watching things happening all around.

The key to it all is the choreography of the ensemble, combined with Ben Hales‘ score. There is no way of telling how much of the sound design was live and how much recorded, a tremendous feat given how much of the movement is set to the music and sound. Whispers into the headphones give the impression of voice within your own head.

What is this play actually about? The experience is almost Brechtian in how it disconnects and distances the audience but there is no obvious message. The breathtaking movement sequences steal the show and almost make any attempts at a plot irrelevant. There are clear characters, but they fall into archetypes, there is a beginning, middle and end, but it’s about the journey rather than the destination.

The glue holding all together is the set. A simple circle that is raised up made to resemble a rooftop from an old side-scroller video game giving the performers plenty to bounce, jump and climb over. Again and again audience members started glancing around for something happening elsewhere, fighting against any communal experience there might have been possible.

This play is amazing. It manages to make the audience feel completely immersed yet alone while in a crowd. It is beautiful and haunting. It’s a great night out. 5/5

The Roof is currently showing at Doon Street Car Park (Opposite the National Theatre) as part of the LIFT Festival until Saturday 28th June. For more information on the production, visit here…