If an evening comprising of burlesque, dangerous stunts and nipple tassels sounds appealing to you, then look no further than Cirque Du Cabaret. Currently performing as part of the London Wonderground on the Southbank, Cirque Du Cabaret promised an evening of fun and they certainly delivered. With drinking and audience involvement encouraged, it gave us all a chance to relax in the electric atmosphere of the Spiegeltent. 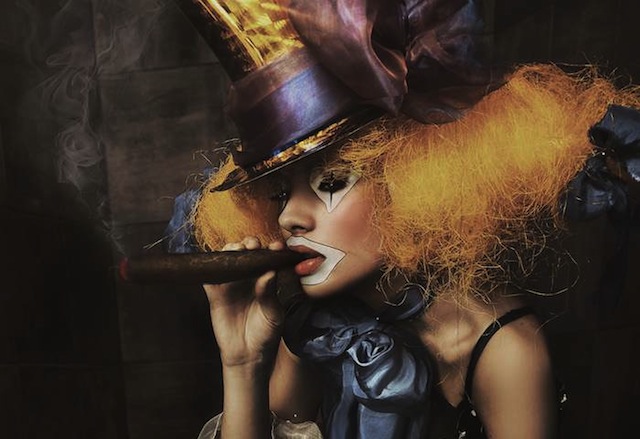 Hosted by the glamorous Champagne Charlie, the show consisted of acts such as Four Femmes on the Thames, an all-girl singer group who both parodied well known songs and performed their own amusing creations. Many of the lyrics were crude, but as they related them to London it seemed to hit a soft spot with the audience as well as have them in stitches. The acts seemed to grow with impressiveness as the night went on; ranging from the stunning Sophia St. Villier whose sexy burlesque act had the audience on the edge of their seats, to the trapeze Miss Empress Stah who dangled effortlessly above the stage on a rope.

The entire evening was immensely enjoyable, if sometimes poorly organised. There was a fair amount of waiting and awkward jokes as the girls cleaning up the stage attempted to work as quickly as possible, whilst being asked “Are we there yet? Are we nearly done?” multiple times by the host. We only got to see three acts before the interval, which with the show starting later than planned was slightly disappointing. However with fire breathing and impressive belly dancing also on the cards of the performers, it was easy to forgive these small problems and focus on the show as a whole.

This was my first experience of a cabaret and was definitely different to the shows I’m used to, but it proved to be refreshing and enlightening. It certainly made a change from the serious tones of traditional theatres, and having the audience around me whooping and cheering throughout was incredibly infectious. This certainly won’t appeal to everyone however. Everything was overtly sexualised, there was plenty of nudity and nothing was taken seriously. For a relaxed, fun evening with a sexy edge, I would definitely recommend Cirque Du Cabaret. I love traditional theatre, but this appealed to me in many ways I didn’t think it would. Keep an open mind and give it a go! 4/5