Rarely performed, Gershwin’s magnum opus juxtaposes a bleak story of poverty, death and drug addiction with a richly complex score. The work is a big ask and perhaps this is why it rarely attempted on the London stage, yet Timothy Sheader’s production for the Regent’s Park Open Air Theatre did not disappoint. It was a grey Monday evening when I was transported to the palpable heat and poverty of Catfish Row where we met Bess, a young, vulnerable women addicted to drugs and dependent on men around her to fund her habit and give her a place to stay. Her current sponsor is Crown, a huge terrifying man with whom she has a volatile relationship. Crown kills a man and goes into hiding and Bess moves in with Porgy, an isolated cripple. They fall in love but Bess struggles to free herself from her old life. 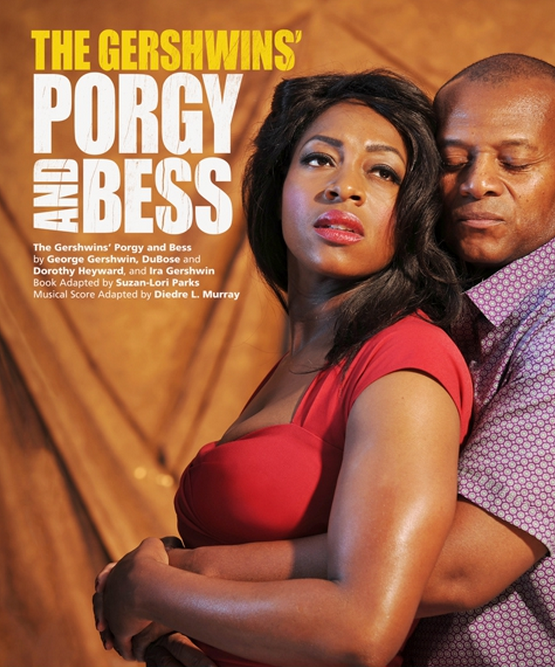 The stage was bare apart from a backdrop of wide metallic, fluid, iridescent structures which took on the lighting effects beautifully. Apart from these fixed structures, the production used very little else and was a testament to what can be achieved with fixed staging and minimal props. The work creatively used only a few chairs and tables to illustrate some difficult and variant situations – including a great storm, a funeral and a gambling den. The lack of scenery enabled the exquisite talents of the cast to shine through and wonderful songs and lyrics of George and Ira Gershwin to stand up, unadulterated.

The first big song was the ubiquitous Summertime performed by Jade Ewen (of ex-Sugababe and Eurovision fame) who astounded me with her truly beautiful rendition. Golda Rosheuvel, as Serena, displayed her phenomenal voice in the piercing, guttural lament of Since My Man Is Dead. I got chills when Porgy (Rufus Bonds Jr) and Bess (Nicola Hughes) performed their two love songs Bess You Is My Woman and I Loves You Porgy. The latter, famously covered by Nina Simone, took on greater poignancy when set in the context of the story as Bess pleads for help from Porgy to turn her back on Crown and her old life. Every single member of the ensemble had a stunning vocal range, power and tone. However, it was Cedric Neal who stole the show as Sportin’ Life. His big number, It Ain’t Necessarily So was pulsating and captivating: swinging and sinister at the same time. The only criticism of the show was that the onstage violence was clumsy and amateur but the violence was infrequent so could be overlooked.

The setting of the Open Air Theatre brings with it some challenges: for example, the weather turned and the audience simultaneously put on anoraks as if choreographed by Sheader himself. But even the weather couldn’t distract from the twinkling lights of the night time second half. Being out in the open made the production feel less artificial and suited the moments of the show that were brutal and sensual in turn. This was an excellent production with a phenomenal cast – a must see! 5/5