Artistic Director of Circus Troupe Circa, Yaron Lifschitz speaks to Theatrefullstop ahead of this year's Edinburgh Fringe Festival! 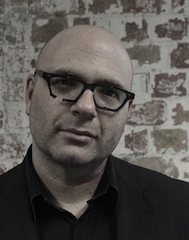 For centuries, our perceptions of the circus have been fixed into believing that the art form is a set genre, devoted to showcasing a selection of the weird and the wonderful, from contortion artists to jugglers, trapeze artists to clowns. Fast forward to the 21st century, and Artistic Director of Circa, Yaron Lifschitz updates the traditional art form into a thematic and imaginative playground full of wonder amazement. As the founder of the internationally acclaimed Circa, noted for their ambitious and awe inspiring productions, Yaron has witnessed the company’s popularity go from strength to strength. Having taken their performance of Beyond worldwide, Circa will be making a pit stop in Edinburgh for the next month as they take on this year’s Festival. Ahead of their performances, I was able to speak to Yaron about his inspirations for the production, what he’s looking forward to the most at this year’s festival and why it’s important to not take yourself too seriously!

Yaron, you are the Artistic Director of Circa, who will be showcasing the critically acclaimed Beyond at this year’s Edinburgh Fringe Festival from 30th July. Could you describe the concept of the production?

Beyond is based on the line between human and animal, between madness and sanity, between being awake and in a dream.  It is a waltz back and forth over this line, a journey into the tender surreal.  It’s Alice in Wonderland meets Charles Darwin. Of course, this is just the starting point. What makes Circa special is that we don’t really tell stories or ‘perform’.  Rather we inhabit and explore, using improvisation, our circus skills and a healthy dose of curiosity.  In a way the concept is ‘make a show not like anything else we have done that moves its audiences’ and everything follows from there.

What inspired the creation of the production?

I wanted to make a show that was like a great art house movie – wonderful, surreal and also thrilling.  I also wanted it to be a circus that was more tender and empathetic than we normally see. Plus I like strange people and animals and also show tunes. I am inspired by everything – music, art, ideas and people. In Beyond I mostly wanted to make something really tender; I was tired of the aggression and rampant sex power play of much of our (and others) work.  Could we make a show at once beautiful and dramatic?

Having received critical acclaim for the production, how does it feel to return to the show?

I love it, it is always growing and developing and we have such an amazing team of artists and crew.  It is a generous and warm company and this really shows on stage. But it’s also scary and you don’t want to mess it up. As our shows are organic living beasts they change, grow and need love.

Has the production gone through any changes since its debut?

Yes, lots – it’s constantly evolving.  We make new stuff and we perform to different audiences and in radically different venue types. Plus we like to keep things fresh. We have recently performed in 200 seat tents and 2000 seat Roman amphitheatres.  German, Australian, New Zealand, Italians, French Scottish and Belgian audiences are different and require subtle changes.

Not really! We make it up as we go along. You start with a bunch of people and a small pile of ideas and you eat your intestines out, sell your soul to the devil and if you are lucky then alchemy happens and you make something beautiful!

You founded Circa 10 years ago now and have gone on to create thrilling and breath taking spectacles from Opus to Wunderkammer. Had you envisioned the success of Circa from the very beginning?

I always hoped people would engage with the work and some would consider it art. Beyond that, staying in business and not being laughed at are pretty good. I think that any day when you wake up and are excited by what you do and the people you get to work with counts as a successful day. We have a great team and we are lucky enough to be respected for our work.

Does the fact that the production has received critical acclaim put any pressure on the Circa team?

Of course, massive pressure.  Putting on shows is a stressful vocation – you have to have guts, work hard and be alive to the possibility of stuffing it up.

Having toured internationally with Circa’s Beyond, from Australia to Belgium, how have you found audience responses? What have responses been towards the production within the UK?

Audience responses have been incredible.  Standing ovations and sold out houses with people being moved by its tenderness and empathy.

What are you looking forward to the most at this year’s Edinburgh Fringe Festival?

Edinburgh is a great gathering of the tribe – artists and audiences from around the world. It is always special to be there plus exhausting, daunting and amazing. You see your work against a constellation of peers and you are reminded by the diversity and size of the world.  You also meet friends. It’s quite the most astonishing place on the planet. I love a beer after the show in front of the cow and I love seeing a full house rise to its feet at the end of the performance. I am also super happy when all our artists finish this tough season with their bodies intact and a smile on their faces.

What advice would you give to any aspiring directors and producers out there?

Trust your vision, relentlessly doubt how good you are at realising it, listen to everyone and don’t take yourself too seriously. Life is complex and weird. There is plenty of mediocrity in the world and if you are lucky you will have the chance to sell your soul later. Now you have to find your vision and your voice and demonstrate you can fill the stage with it.

Circa will be performing Beyond at this year’s Edinburgh Fringe Festival at the Underbelly (Bristo Square). For more information on the production, visit here…