The Tiger Lillies: Rime of the Ancient Mariner @ The Queen Elizabeth Hall Review

After winning the Olivier Award in 2002 for their show Shockheaded Peter, The Tiger Lillies have continued on with their alternative cabaret style, picking up a cult following as they’ve done so. Tackling Samuel Taylor Coleridge’s classic poem, The Tiger Lillies have teamed up with visual artist Mark Holthusen to bring the multimedia extravaganza that is Rime of the Ancient Mariner. 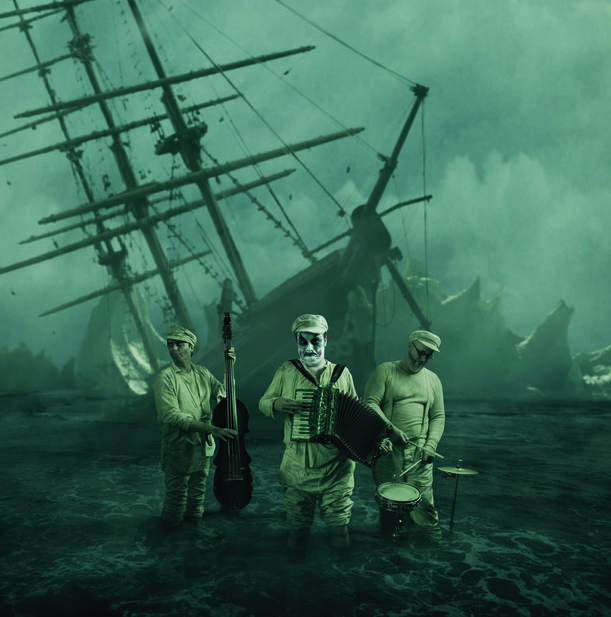 I was instantly bewitched by their use of stunning projections. With a projection screen behind the three-piece band, but also a translucent screen in front of them, images of water and mermaids swam around the band, reaching for them as they performed. It was glorious to watch such forward bounds in performance technology, and truly enhanced the entire atmosphere. At one point a giant sea monster filled the screen, making the audience laugh and marvel at the same time. However, the ninety minute set was dragging by the end. There’s only so much the visual projections could do for the show. The story was spread across twenty-five songs, of which I can only recall the tune of one or two, as the songs became heavily similar towards the end of the show. There was something almost unnatural and formulaic to the process as they switched from upbeat to ballad to upbeat to ballad and so on. There were a few occasions when the audience tried to clap along, but quickly got lost in the changing rhythm and lack of connection from the performers.

I was also struggling to make out the lyrics sung by lead vocalist Martyn Jacques. His beautiful falsetto is a delight to listen to but made it difficult to decipher the words at times, leaving me feeling lost as to what was happening in that particular part of the story. It didn’t feel as if the performers were particularly connected to one another either. Jacques and bassist Adrian Stout were heavily made up with stage make up, and incorporated characteristic facial expressions and movement as they performed. This worked well with the band’s alternative cabaret style, and kept me engaged when my interest in the songs began to fade. Mike Pickering on the drums however, was wearing minimal make up and performed almost entirely naturalistically. While I was aware that this was obviously a conscious decision on his part, it dampened the atmosphere and made him seem like a bit of a spoilsport!

Overall the show was a bit of fun, not to be taken too seriously. The visual effects made it worth seeing alone, and perhaps the music was just not to my taste. There’s no denying that The Tiger Lillies are extremely talented and original. A breath of fresh air if you watch a lot of wordy, traditional theatre. 3/5

The Tiger Lillies: Rime of the Ancient Mariner was on at the Queen Elizabeth Hall (Southbank Centre) from Friday 29th- Sunday 31st August. To find out more about The Tiger Lillies, visit here…