It is strange to think that only recently photographs were a relatively expensive thing. Photographers had much more of a mystique attached to them and war photographers were stars. The original war photographers, Gerda Taro and Robert Capo are the subject of this new show by Idle Motion. 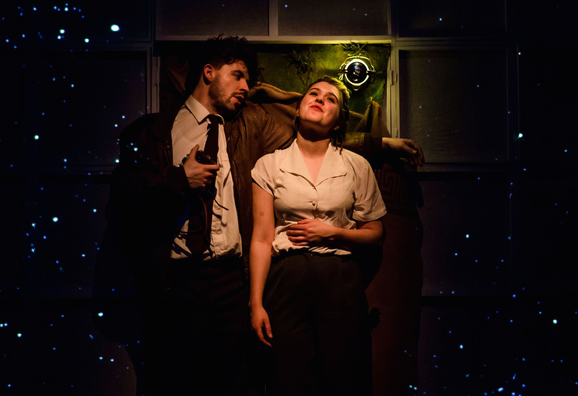 It is a romantic tale that spans decades. Half of the show concerns Robert‘s brother (who shares his adopted name) and his quest to find a missing box of Capa negatives. These scene‘s intersect the true tale, the one of Roberts and Gerda‘s romance in Paris and Spain during the 1930‘s. They meet, fall in love and are seprated by ambition and fate. Knowing that the tale is true gives it added weight, as does the occasional usage of war photos they took in real life.

Stylistically the show seems stuck between wanting to be a straight play and a fringe show. Movement based sequences are all over this play, but the heart of the story is told the old fashioned way: characters talking to each. The two styles don‘t necessarily compliment each other and the same could be said of the two storylines. The great exception is a sequence in which Taro explores the bombed out ruins of a Spanish village in which movement, light and projections combine in a masterful way.

The show has a small, versatile cast that do their job admirably. The physical aspects don‘t seem quite as polished as they need to be but the interactions and chemistry on stage works wonders. It is a wonderful story, told by a good cast and filled with little things that elevate it. What it lacks in consistency, it makes up for in originality and effect, but it is the harrowing romance and the futile quest of the remaining brother which carry the show. 3.5/5

Shooting With Light is currently showing at the New Diorama Theatre until Saturday 11th April. For more information on the production, visit here…