Master of the Macabre @ The Vaults Review

Master of the Macabre bills itself as the most horrifying magic show in London. This is possibly true, though the play is competing within a relatively select niche… Set in the eminently atmospheric Vaults in Waterloo, this one-man show depicts an ominous story of sibling rivalry, punctuating the tale with frequent, suitably sinister, sleights of hand. 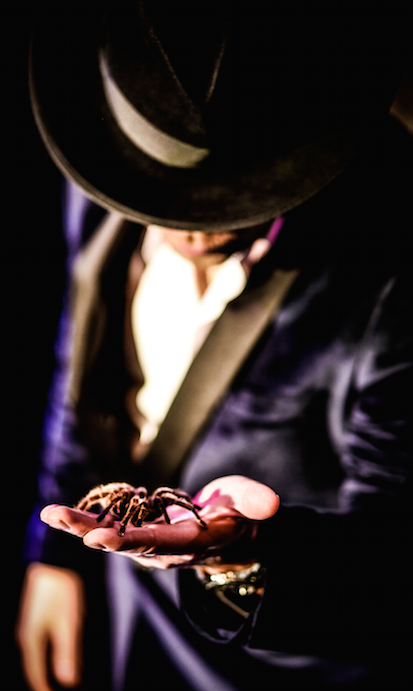 First and foremost, the show is a lot of fun. Several of the tricks are rather hackneyed, prompting giggles rather than gasps from the assembled guests. That said, our host, Benedict Barber, moves briskly forward, coaxing hilarious reactions from even the most recalcitrant volunteers. Indeed, the show is often at its strongest during improvised moments; a former magician, Benedict seems comfortable working with unpredictable crowd dynamics, even if that entails abusing his guests and calling out their cowardice.

The backstory itself feels a bit laboured and Benedict’s performance stiffens during the retelling. The pursuit of cheap scares or establishing a mood of foreboding takes the story into rather hokey territory and is unlikely to give horror fans any sleepless nights. Despite this, there is often a tongue-in-cheek quality even to moments of high melodrama, so one gets the impression that show itself is intended to be seen as a playful pastiche rather than taken at face value.

The second half is crammed with twists and turns so I won’t give any spoilers. Suffice to say, there are a few stunts that will surely get under your skin and leave you guessing as well as a memorable séance. For those still searching for halloween plans, Master of the Macabre certainly fits the bill. 3/5

Master of the Macabre is currently showing at The Vaults until Sunday 1st November. For more information on the production, visit here…

Benedict Barber, Master of the Macabre, The Vaults
16th October 2015by Theatrefullstop

« Previous post
L’Enfant Qui @ Bristol Old Vic Review
Next post »
One of the founders of Interactive theatre collective, Non Zero One, John Hunter speaks to Theatrefullstop about performing at this year’s The Other Art Fair!