The heroic tale of a boisterous protagonist who steals riches from the affluent to help his impoverished community survive the day to day struggles of extortionate tax rates is one that has resonated throughout the centuries. Said to have been penned in the late 15th Century, the mythical being has inspired many with his modest beginnings, sense of adventure and his drive to challenge the ruling classes. Robin Hood couldn’t be a better panto to be reimagined for the stage this year with it’s social, emotional and political intentions. 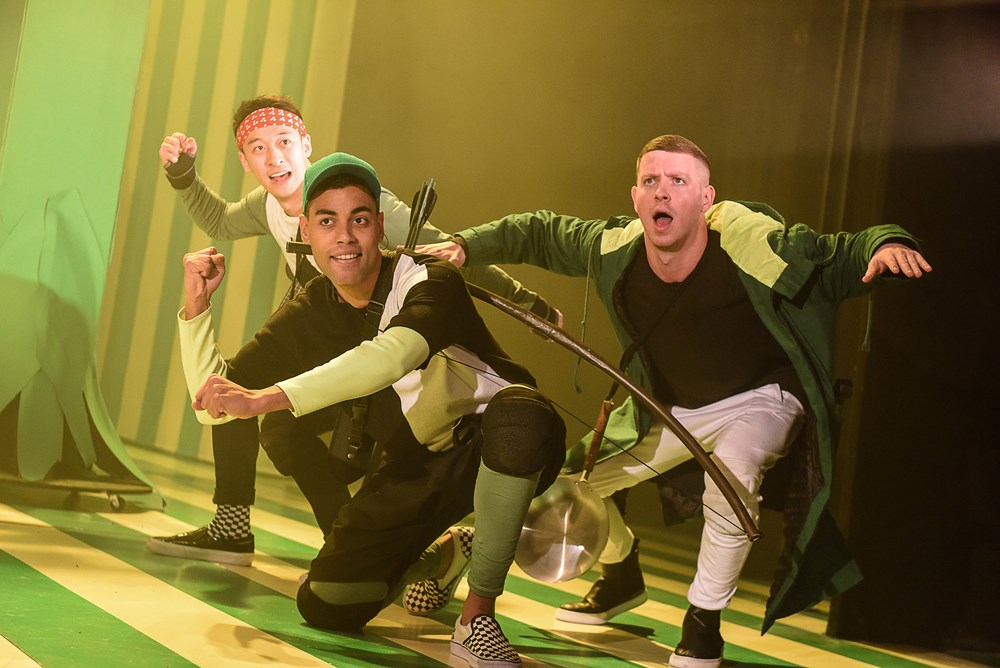 Kerry Michael directs an exuberant interpretation of the medieval classic. Based in Strattyham, an amalgamation of the culturally diverse and contemporary Stratford, and the typically associated antiquity of Nottinghamshire and its green forests and archaic castles. Coerced into the production by Robin’s merry men, Titch, Red and Tuck, well and truly start the evening with a bang. Alex Chang, Ashley Joseph and Geraint Rhys Edwards display a boyish brotherhood that reverts the atmosphere into a childish one, one that truly brings the crowd together.

Unification is key in this show, and it couldn’t be more prevalent with the importance placed on key characters. Although you’d assume that the show would mainly be about Robin, the evening actually places a greater emphasis on the myriad of characters at play, to the point that it could be forgotten that the piece is titled Robin Hood. Oliver Wellington delivers an understated Robin, young at heart with a drive for being the best archer in the land, however I feel that this is his only drive. Robin is faintly sketched as a character, strangely enigmatic when he should in fact be at the fore.

Ashley Joseph‘s Titch is a stand out, a bundle of fun and energy that keeps the audience entertained throughout the evening. Derek Elroy‘s Nurse adds a sprinkle of fierceness attributed to Grace Jones, mixed with a Dusty Lee inspired warmth; a fantastic twist on a pantomime dame that works to the production’s strength. Theatrical legend, Michael Bertenshaw mesmerises with his Keith Richard’s inspired King John, a loveable rogue who appears to live of every boo and hiss pelted his way. Ashley Campbell dazzles with his starry eyed interpretation of the imprisoned King Richard. Described as the ‘Lion Heart’, Campbell clearly has a ball subverting the hero’s usually resilient persona.

Musical Director Robert Hyman infuses the theatre with a joyful spirit that ripples throughout the evening. Soul fuelled, rock tinged, pop inspired songs modernise this well known tale. Perry Melius on drums and Wayne Nunes on Bass Guitar no doubt deliver a dynamic soundtrack that has me tapping my feet all evening.

Harriet Barsby and Jenny Tiramani deliver a vivid landscape of characters with their outlandish costumes. The show is a catwalk of colour, with the likes of King Richard’s sparkly chain ware, to the merry men’s comical Harajuku/chess inspired get up. There’s a nod to the medieval era, with tunics and tights aplenty, however the spirit of the piece is vibrant and modern.

The evening overall is a celebration of the year, it’s a reminder that all concerns should be left by the front door, and that inhibitions for 2 hrs should well and truly be released. What the production lacks in narrative, it most certainly makes up for in its music, song, dance and costume. 3.5/5

Robin Hood is currently showing at the Stratford East Theatre Royal until Saturday 23rd January. For more information on the production, visit here…