A marvel to behold and celebrate, Stella in collaboration with LIFT Festival, is a show of dignified emotion, exquisite personality and overwhelming charisma, a show not to be missed. As you enter the historic Hoxton Hall, you are immediately presented with an ageing figure on stage, you observe, bemused by the melancholic facial expression portrayed on the almost translucent face. 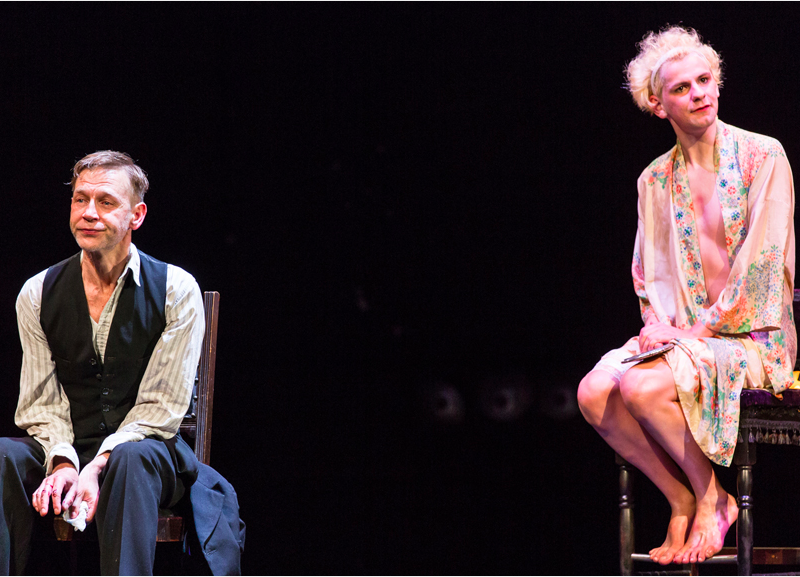 ‘Neil Bartlett’s one-man-show for two bodies is inspired by a truly remarkable story. It takes cue from the busy life and lonely death of one Mr Ernest Boulton, a failed Victorian bank clerk who in 1868 reinvented himself as a woman and scandalised the West End of London by looking for love in all the wrong places.’

A night of liberated writing, Neil Bartlett creates a text that is well written, well directed and well performed. A show that invites you into the complex world of gender, identity politics and queer expression, in a realistic and natural manner, that has you riveted from the offset. In a thought provoking exploration, Neil Bartlett imaginatively presents a story that is impossible to ignore, from the spectacle of applying makeup to ‘The knock on the door’.

Stella, features a minimalistic design, a solo light bulb hangs above the actors heads, whilst a board of flashing flood lights feature upstage, beaming with symbolism of the impending demise of our characters. A sound scape of sound effects and live singing invigorates this show, including the knocks at the door, glass shattering and busy nightclub soundtracks. Technically this show is splendid, also reflected in the pace of the piece an element that provides energy on stage.

Stella challenges gender engulfing masculinity, femininity and the transformation of one to the other. In a visually dynamic demonstration, this performance moves between Old Stella, performed by Richard Cant and feminised Young Stella, Oscar Batterham questioning ‘what is the recognised point of transformation, if even there is one?’. Stella, is filled with intense imagery aided by a foreboding character titled ‘The Attendant’ played by David Carr, symbolic of events to come, whilst displaying the gaze of a patriarchal society. As the audience, you are entered into an archaic society, however comparative to our existing world around us, where the fluidity of gender if possible, is questioned and challenged.

Not only does the content of Stella perform inclusion but it is also embodied in its audience. In front of me there is a drag queen, to the left Julian Clary and in the front row Lois Weaver, a recognised performer for work within the gender sexuality and performance sector, whose book release I reviewed earlier on this year. Sitting in an auditorium with such experienced and dedicated souls to this area of work adds to provocative nature of the show. It invites a wealth of experience, all engaging in this truly astonishing story presented on stage.

This performance denoting an awareness of self, is enlightening exploring the theme of identity construction in a softened, naive state that is very easy to respond and connect with. This piece in its attempt to explore the life of Mr Ernest Boulton, specifically Stella is tender, emotional and kind-hearted. I leave the production truly touched, enacting a scene from the play, in the act of reapplying ones makeup. 4/5

Stella is showing at Hoxton Hall until Saturday 18th June as pat of LIFT 2016. For more information on the production, visit here…