Programmed as part of the 60th anniversary season of new writing at the Royal Court Theatre, Lucy Kirkwood’s new play asks important questions about the responsibility of the older generation towards the young. 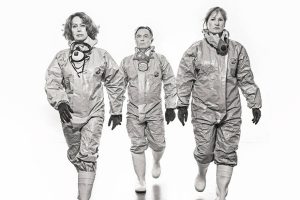 Hazel (Deborah Findlay) and Robin (Ron Cook), two retired nuclear engineers, live in an isolated cottage on the East Coast. After a nuclear meltdown caused by an earthquake, comparable to the Fukushima disaster, the couple are forced to leave their farm and move outside the “exclusion zone” which is contaminated by radiation. Due to the lack of power, as the nuclear power plant has been shut down, electricity is restricted to a few hours per day.

When old friend and former colleague Rose (Francesca Annis) comes for a surprise visit after a 37-year absence and a successful career in the U. S., Hazel confuses her with an intruder and Rose ends up with a massive nose bleed. Although the two women chat and bicker, as old friends do, there is palpable tension between the two. Hazel is never truly at ease with Rose who seems to know their rented cottage too well and still has an affinity to Hazel’s husband of forty years. Whilst Hazel has grown children, even grandchildren, Rose is alone because she has been “picky with men”. When Robin finally appears, he turns on the old charm and they reminisce about the past, reviving their dance number to James Brown’s “Ain’t It Funky Now.” Yet the harmonious episode does not last very long. Rose has a shocking proposition and advises her friends to call their children.

After the epic Chimerica, which dealt with the relationship between China and the U. S., Lucy Kirkwood’s three-hander is a more intimate work but hardly less significant. Focusing on the responsibility of the older generation for the young, the play is not a blatant attack on the “irresponsible baby boomers”, instead it carefully examines what they actually owe the younger generations.

It is refreshing to see another play directed by James Macdonald focusing on characters who are even older than the average theatregoer after Caryl Churchill’s brilliant Escaped Alone, which started off the season. The Children is character driven and beautifully written and the production benefits from an impressive cast. Deborah Findlay is excellent as the health conscious Hazel who tries to keep young by sticking to her yoga regimen and salads with the occasional sip of turnip wine. Francesca Annis gives a convincing portrayal of Rose, a cancer survivor and outsider who returns after her successful career in the U.S., intending to do the right thing. It is interesting that Rose is the only one who can hear the church bells of the sunken medieval town. Ron Cook’s Robin is a charming rogue who still loves his wife enough to make up a story about their cows still being alive in the exclusion zone and pretending to go feed them every day when in reality he has been busy burying them.

It is not quite clear who The Children refers to – Hazel’s offspring and their children, who are often talked about but never appear in the show – or the three characters themselves as they have still have retained some of their childish ways. 4/5

The Children is currently showing at the Royal Court Theatre until 14th January 2017. For more information on the production, visit here…