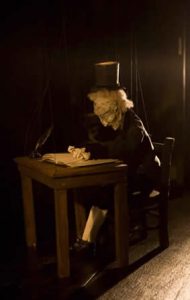 Delighting audiences for over three decades, The Puppet Theatre Barge have truly ignited imaginations with their magical marionette productions. Having performed thousands of shows in their history, Movingstage trailblaze by keeping the tradition of string marionette puppetry alive. The company talk to Theatrefullstop about their upcoming production, A Christmas Carol.
Movingstage Theatre will be performing A Christmas Carol from Saturday 3rd December. How are rehearsals going for the show?
Rehearsals are going very well. We generally rehearse productions that have already been devised some time in the past and are part of our repertoire for a period of two weeks. This is now week two and we have three puppeteers working on this production.

A Christmas Carol is a well known Christmas classic. Why choose this story in particular to perform?
We decided to adapt A Christmas Carol for the marionette stage not only to have a production that has themes relevant to the Christmas season, but also because the story has elements that work perfectly in the marionette stage. The Puppet Theatre Barge specialises in a rare form of puppetry which uses long string marionettes, meaning that the puppeteers are out of view. By using long string marionettes, a world with no visible human presence is created and the audience’s imagination is captured and stimulated by the puppets – which become the main focus of the show. This form of staging allows us to create a sense of perspective and depth through the use of sophisticated lighting and scenery.
This type of staging has a lot of potential in the representation of the otherworldly characters present in the story, e.g. the ghosts of Christmas Past, Present and Yet to Come. Characters, some of them with little human resemblance, may appear and disappear in magical ways, fly on stage, spin out.

How does Movingstage decide what shows to perform?
The stage at the Puppet Theatre Barge is tailor made for long string marionette productions. We generally present our own Movingstage in house productions. We alternate among the approximately 30 productions in our repertoire and also present new work. Our most recent new marionette production is End Games, based on the subtle and delicate verse of Finuala Dowling and presented in 2015 to our audiences in central London and Richmond, using puppetry, poetry and music.

Movingstage celebrate 47 years of creating marionette puppet theatre, with your official venue, The Puppet Theatre Barge celebrating 34 years. As a company did you ever imagine this longevity?

Movingstage was founded in 1978, while the Puppet Theatre Barge opened to the public in 1982. The company is a family run business, where the founders, Gren and Juliet Middleton, work together with other members of the family, including their grandchild Stan Middleton, third generation marionettist.

Movingstage are unique in that all performances take place on a barge. What inspired this choice of venue?
Movingstage also has touring productions and puppet workshops that are presented in schools, festivals and venues across London. After four years of touring, Gren and Juliet Middleton decided that they needed a venue to present their work. It was less costly to invest in a boat compared to a building on land. The boat is a particularly good venue for a theatre as it helps in creating a unique atmosphere that allows audiences to immerse themselves into the world of puppetry.

In your performing history, you have performed thousands of shows. Do you have a favourite?
Since we are very much involved in the creating process of our productions, it is difficult to pick one as a favourite. Also, rehearsals are always an opportunity to change elements in our productions that we no longer like; it is a process of constant evolution of the shows so that before the opening we end up with a play that reflects our preferences.

Are there any challenges to staging works in the Theatre Barge?
In comparison to other theatres, the space is limited. This is part of the very nature of the Puppet Theatre Barge, so our marionettes, sets and lights are tailored made for that stage. Because we are on a boat, we never just turn up to rehearse and/or perform. There are practical duties that need doing, such as filling up the water tank, the diesel for the heating, traveling and running power via the generator if there is a problem with the mains, etc. Also the barge must be maintained to a high standard constantly, to comply with all health and safety regulations required, as it is still a theatre, although on the water.
The barge travels and performances can be presented in different locations (we operate in Little Venice and Richmond upon Thames). On the river, we need to be aware of tide times for instance (the water at some times during the day can be too high for audiences to get on board).

What advice would you give to aspiring puppet performers?
It is important to get to see as many puppet shows as possible to get an idea of what one likes. Then besides the benefits of having training in theatre, dance and/or puppetry, this is an art that one learns by doing. Creating new work, especially marionette productions, can be challenging but extremely rewarding. It is an art that requires a great amount of discipline but it pays back. Imagine what fun it is to be able to play all sorts of characters, e.g. from a little boy to an old lady, and from a mosquito to a rhinoceros!

A Christmas Carol is currently showing on the Puppet Theatre Barge until Sunday 8th January 2017. For more information on the production, visit here…

« Previous post
WHAT TYPE OF ACTOR ARE YOU?
Next post »
The Children @ The Royal Court Theatre Review