We now find ourselves living in an era where race relations has become a crucial topic to discuss. Injustices that have taken place due to race are now being recorded and are sending shockwaves through worldwide media. We no longer live in a time where we wait for the latest headlines via the news or physical publications, rather we ourselves break news, with the click of a button in a matter of seconds becoming viral. The Bubbly Black Girl Sheds Her Chameleon Skin although set in the 60s, 70s and 80s taps into today’s consciousness. 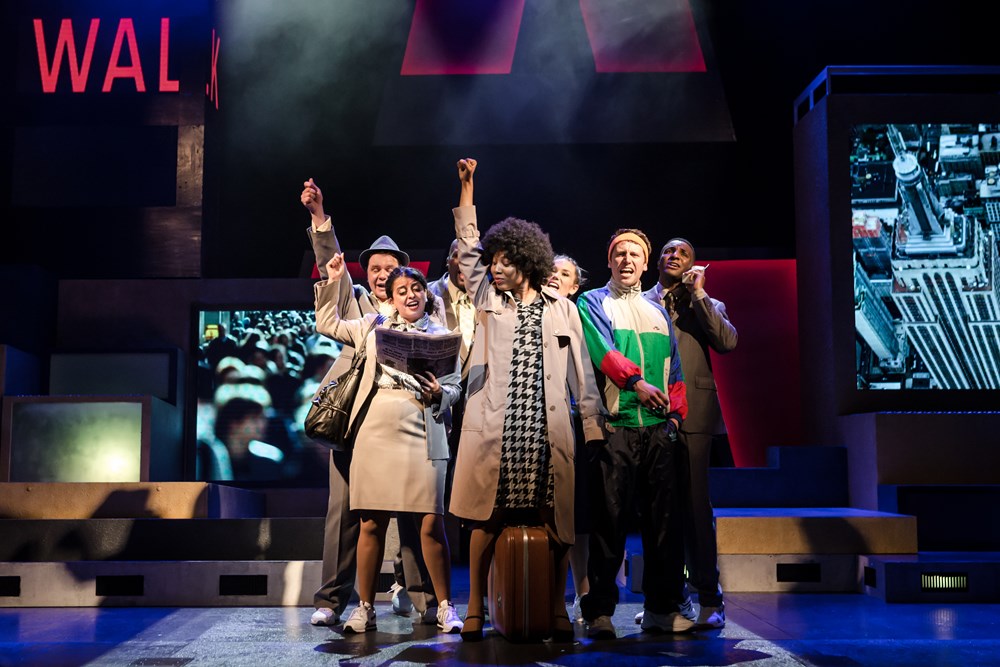 Kirsten Childs highlights a myriad of issues of yesteryear, but what’s haunting is just how resonant and relevant these themes still are. Race is perhaps the key theme of The Bubbly Black Girl Sheds Her Chameleon Skin with a young Viveca, played animatedly by Karis Jack navigating her way through an overtly segregated reality. A young girl attempting to make sense of the world, Viveca often finds herself mostly at home playing with her dolls in her room. At a young age she is already questioning her identity; people pleasing to fit in. The production is relatable, Child’s presents a coming of age tale that relates to all no matter your race or gender. We all question what it means to fit in, life is often a lot easier when we do… but does that equate to happiness?

With the likes of Chewing Gum Dreams adding to the spectrum of black female characters, there appears to be a true shift in perceptions of the young female experience and this is important. Certain truths are uncomfortable to witness, nevertheless they are crucial in educating the audience as to the mixed messages society sends out. Viveca often wishes she has the same complexion as her doll, this is heartbreaking but a stark reminder of institutionalised racism. Childs although creates an uplifting musical, is careful not to candy coat, and this we need more of.

Karis Jack vividly depicts a bright eyed Viveca. Driven by her dreams to pursue a career as a dancer, she takes everything in her stride. She’s quirky, but often so that I wish for moments of subtly. Sophia Mackay carries the baton as the older version of Viveca. She still inhabits her quirky qualities however is incredibly driven. Ashley Joseph steals the show as Lucas, a lothario who steals older Viveca’s heart however is momentary and doesn’t truly develop any further. Jay Marsh‘s Gregory is mysterious-he’s the love interest that remains prevelant throughout Viveca’s life, but again could be developed further.

Josette Bushell-Mingo directs a piece adamant on celebrating the awkwardness of growing up and assimilating to different social circles and that ultimately is to be commended. Tim Reid‘s video projection’s vividly encapsulate the hustle and bustle of New York and its iconic architecture. Numerous screens decorate the stage and take the audience through the decades. Rosa Maggiora‘s cubic geometric stage design gives the stage a height and shape that is visually striking. The evening’s musical accompaniment integrates soul, jazz and r’n’b to deliver an effortlessly catchy soundtrack. The evening however is a show of two halves, the first evidently stronger than the latter due to the attention given to Viveca’s internal and external struggle to fit in. 3.5/5

The Bubbly Black Girl Sheds Her Chameleon Skin is currently showing at Stratford East Theatre Royal until Saturday 11th March 2027. For the more information on the production, visit here…

« Previous post
The Curious Incident of the Dog in the Night Time @ The Marlowe Theatre Review
Next post »
Actor Ashley Joseph talks about his latest role in The Bubbly Black Girl Sheds Her Chameleon Skin!