Yellow Earth Theatre was formed in 1995 by five British East Asian* (BEA) actors; Kwong Loke, Kumiko Mendl, Veronica Needa, David KS Tse and Tom Wu.The company sought to develop work that would widen the choice and type of roles being offered to BEA actors at that time and to create work that brought together our physical skills and western drama school training that explored our own cultural heritage. 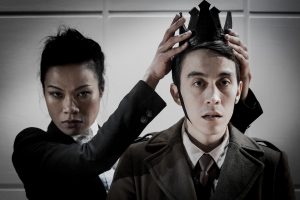 This is a simplified version of the epic Elizabethan tale, cut down to keep the play simple and reflect our current political time.
The original is a gory blood bath, but director Ng Choon Ping takes a more stylised approach focusing on the text. The horrific battles are shown through simple movements or gestures and it is down to the actors to play the trauma. This seems to reflect the desensitisation we have towards violence constantly on our screens. It is pleasing to see that it puts focus on the predominately female led cast. Especially with the recent backlash and outcry to see more East Asians in theatre and on our screens it is no surprise that Yellow Earth still stand strong in their mission to present plays that explore their own cultural heritage.

The lack of gore and movement to suggest any war or battle puts pressure on the audience to listen more intently to the words and watch the play with more concentration. By cutting down this lengthy tale it highlights the atrocities even more by compacting them until they seem tired of one battle and colonised country after another.

Comic timing and hypocrisy of the the buffoon like king is played well by Leo Wan. Emphasising history repeating itself through common mistakes made by royalty and government. The use of the black crown held on by a rubber band and passed around like pass the parcel, also highlights the joke of being born into royalty and power and that it can be fought for or threatened by violence and destruction. Clever multi-rolling of caste and gender swapping really sheds light onto equal rights and women still being seen as lesser than the men. Ping’s clever use of projecting the character’s name before the scene begins is a helpful aid as there is a lot of beautifully displayed multi-rolling.

The live Taiko drumming by Joji Hirota adds extra authenticity and ambience to the piece, underscoring it with perfectly timed dramatic crescendo’s which lift the atmosphere. The cast play well with the live drum rolls and bursts of well timed humour accentuating the gender equality within the piece top it off nicely.

Tamburlaine at the Arcola is a timely piece and reflects today’s political climate. Work by Yellow Earth is essential to moving theatre forward in the right direction, and the strong cast aids Ping’s vision. I gain an insight into history that can be underplayed and westernised, Ping’s vision is clear and exposes the cultural imperialism in Marlowe’s writing. 3/5

Tamburlaine is currently showing at the Arcola Theatre until Saturday 8th April 2017. For more information on the production, visit here…

« Previous post
Apply to be apart of the Network of Independent Critics!
Next post »
Big Guns @ The Yard Theatre