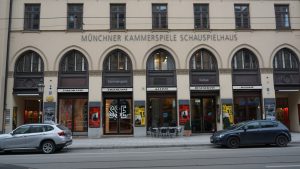 Originally, the Munich Kammerspiele was a private theatre in Schwabing, founded by Erich Ziegel in 1906. In 1917 Otto Falckenberg – “the maven of Expressionism” – became Artistic Director and moved the theatre into the Schauspielhaus in Maximilianstrasse in 1926, an Art Nouveau building designed by Richard Riemerschmid and Max Littmann. Ever since 1933 the theatre has been a municipal theatre and is therefore generously funded by the city of Munich.

Otto Falckenberg (1917-1944) produced and/or directed many important productions at the Kammerspiele which helped the theatre become the most important German language theatre outside of Berlin in the 1920s. His productions included the first staged play by Bertolt Brecht, Drums in the Night, in 1922, as well as dramas by Frank Wedekind, August Strindberg, and William Shakespeare. 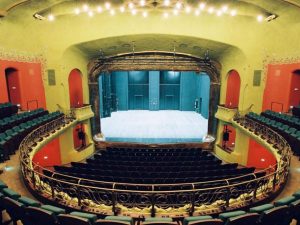 Johan Simons took the Kammerspiele to new heights in 2013 when the theatre received a variety of awards by the important theatre magazine “Theater heute” (Theatre Today) and by a jury of critics – Theatre of the Year, Best Actor gongs for Sandra Hüller and Steven Scharf and a Best Young Actor award for Risto Kübar. Orpheus steigt herab (Orpheus Descending), directed by Sebastian Nübling, shared the Best Production award with three other plays.

Since 2015 Matthias Lilienthal, formerly Artistic Director of the HAU (Hebbel am Ufer) in Berlin, has been at the helm of the Munich Kammerspiele there has been some media controversy regarding the quality of his productions and his programming with several actors supposedly “escaping from this amateurish theatre”. However, this might have been hyped up news by the media more than a truthful representation of the true quality of this theatre.

I will be reviewing productions at the Munich Kammerspiele for Theatre Full Stop. The first production I have already reviewed – Nō Theater – did not disappoint as it was beautiful as well as challenging. English surtitles are provided for your viewing pleasure.

To find out more about the Münchner Kammerspiele, visit here…