Isaac returns home after serving in the marines to discover disorder has unfolded in his family home. His mum, Paige has lost all sense of a routine. Fed up with her domestic duties, she has stopped cleaning, washing and caring for her husband Arnold, who used to be the champion of the household – the man who made all the money. After his stroke he is confined to a chair, unable to look after himself, and decorated in a multi-coloured wig and clown makeup. 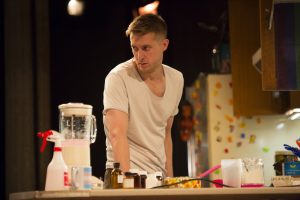 Courtesy of the Bush Theatre.

Andy Williams’ portrayal of the ailing man is horrifying to watch. Hardly moving, he conveys a lot of emotion, showing the fragility of a person fallen from grace. Ashley McGuire’s Paige stands out from the offset. Despite the neglect she shows towards her husband, it is impossible to dislike her. Her delivery of the text is effortless, and her jokes land with ease. Running a strict regime, she emasculates her husband, controlling him like a puppet on strings.

Combustion of different materials decorates the stage, but it never seems messy. Ben Stones’ set looks like a squat, yet somehow appears clean and uncluttered. Whilst being funny the play also tackles tricky themes, doing well to mock politics, question gender and talk about complex issues of family domestic life. Taylor Mac’s slick comedy has moments of political incorrectness and seriousness in perfect measure. He even manages to input some queer theory into the play, which is no easy task.

This family don’t do cupboards anymore, and they don’t do order – their ordinary structure is lost. But in this loss of structure is a gain of freedom. How does a soldier readjust after coming back from a warzone, when his house is a constant battlefield as well? Wonderful direction and smart writing make this production a sensationally subversive comedy, that somehow also finds a way to pull at our heartstrings. 4/5

Hir is currently showing at the Bush Theatre until Saturday 22nd July 2017. For more information on the production, visit here…