Authentic in craft and narrative, A Hunger Artist produces a rich circus aesthetic which transports you to the ‘Big Top’. A red, gold, fringed curtain sets the stage for imagination and this striking piece of theatre delivers an enviable range of theatrical skills. An adaptation of Kafka’s impressionable short story, Sinking Ship Productions, brings a prepossessing production which is ingeniously constructed. 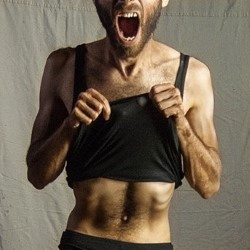 In the beginning there is a matchbox theatre, ornate and held in a genuine suitcase, a crackling orchestral record plays and our host reveals himself. At first a ‘buffooned’, chalk faced man (performer Jonathan Levin) invites us to hear the archetypal tale of an individual marginalised and victimised by society at large. Breaking the forth wall, Levin remarks that the figurines of the miniature theatre are too small and therefore extending his urgency to members of the audience, they are invited to play the roles featured in this darkly comic tale. Levin moves from host, artist and manager presenting a solo show that matches no other.

Once cheered by thousands, the Hunger Artist is now forgotten by everyone except his one-time manager. Desperately stretching an arm through the railings, the artist’s condition deteriorates as his hunger sentence lengthens. Starvation takes over his body, becoming overwrought and displaced amongst the occupied circus tent, abiding the constraints of a performative pain and suffering from the taunts of passers by. What begins as a simple nostalgic story transforms into a startlingly inventive trip into the nature of memory, art, performance and spectatorship, as told by the only person who remembers an artist whose act was simply… to hunger.

Tilting the crate to traditional circus performance, writer Josh Luxenberg and director Joshua William Gelb, wonderfully articulate the authenticity of telling a story. Inventively told, hat stands are used to create poetic puppetry and by the flash of a camera the bare ribs of hunger are exposed, whilst faced by the brutal soundtrack that accompanies his demise. Though it is hard to describe the complex construction of this show, the company create a physical feat which moves through cage, tent and train in a whirlwind of unpredictability. I simply have to say go and see it, you will not be disappointed. I leave the production struck by the adaptation’s ingenuity from concept to production. 5/5

A Hunger Artist is currently showing at Zoo Venues until Monday 28th August 2017 as part of this year’s Edinburgh Fringe Festival. For more information on the production, visit here…