Anxiety is always just around the corner in Gareth Clark’s curious solo piece FEAR. Written and performed by Clark, this piece endeavours to engage us in a cultural debate on where the western world is heading and whether we’ve actually been there before. 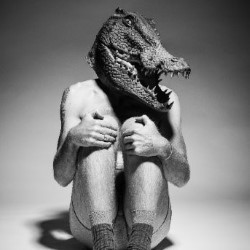 The set, four substantial letter shaped red blocks that spell out the show’s title and a handful of strategically placed chairs. A man dressed as a crocodile coyly simpers over to the microphone, it all feels as if we are in a hoax TED talk.

We start at Clark’s childhood where religion, cleanliness and masculinity all pose a threat to a poor obsessive young boy. Fear can control anything, which we learn later in Clark’s life when describing his fears of financial responsibility, his worry of contributing to society and the imminent threat of terrorism.

Clark gives a full-blooded performance, this is clearly a very personal piece and he carries it with the required energy. There are moments that feel awkward and unnecessary, an engrossing video montage of government safety videos is obscured by Clark dancing as a crocodile. There seems to be a confusion in the direction, is this a performance art piece or is it an open discussion? Clark works most spectacularly when engaging in dialogue directly with audience members. Perhaps taking a more ‘forum theatre’ approach to the piece might give it the structure it needs, that way Clark can find the answers to the many questions he’s asking.

At times some references fall on deaf ears to an audience of millennials, particularly the comment on rent prices for flats in Cardiff during the 1980s. What Clark does well though is highlight the cyclical nature of history, how all these problems we are facing now (disastrous politicians, crippling debt and threats of warfare) are issues that have been faced by generations of people before us.

Asking a lot of questions without ever finding a conclusion, this performance sometimes feel structurally hazy. There are a lot of promising moments but you can’t help but feel this piece is a first draft of something that could go on to be very striking. 3/5

FEAR is currently showing at Zoo Venues until Monday 28th August 2017 as part of this year’s Edinburgh Fringe Festival. For more information on the production, visit here…