Sascha Moore’s Trashed is a strong call for change in the way we treat male mental health and discusses how love and loss mean different things between the classes. Goody (David William Bryan) has been working the bins for the best part of 19 years, with his life hanging on a cliff edge we see the complex emotional destruction one man goes through in order to clench on to any glimmer of happiness. 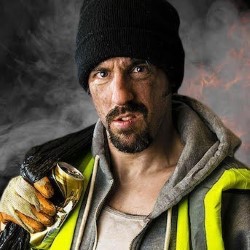 Bryan deals with this weighty script well, taking us on the autobiographical journey of Goody’s alcohol fuelled life with fistfuls of brawny stamina. Class struggle reverberates through every punching jibe Goody makes at the audience, it’s this breaking of the fourth wall that really allows this script to deliver.

‘Thought you were meant to be polite, middle class’ spouts Goody as he peers at an astute member of the audience, can of Strongbow in hand. Whilst mourning the loss of his child, Goody and his wife attend child bereavement classes but Goody can smell the repugnant stench of privilege more vehemently than the ‘shit’ he shifts every day at work.

This is a brutal endurance-sport-like performance, Bryan forcibly downs cans of cider repeatedly, but this poses no concrete purpose other than making a health and safety risk on stage. A lot of dialogue feels lost in this performance, something I fear might only get worse further on in the run.
At times, the chaos on stage makes the direction and movement messy, almost unrehearsed with a feeling of disjointed improvisation.

Moore interrogates how privilege is inherently embroiled in the arts, Goody talks about his love of photography but not having the means to pursue it. This question Moore poses is one that is rarely given the space to be discussed at length.

Reeling with anger, Goody protests that the establishment takes a contrasting view between the loss of a middle class child, compared to a working class one. Moments of pure excellence are somewhat eclipsed by a nagging sense of stereotyping in both the depictions of working and middle class life. Especially in Goody’s aching dependency on Strongbow, swearing and ultimately the lurid accusations that bring his climactic downfall. These final spewing scenes bubble very quickly, making the narrative arc feel a tad unbalanced.

Trashed is currently showing at the Underbelly until Sunday 27th August 2017 as part of this year’s Edinburgh Fringe Festival. For more information on the production, visit here…