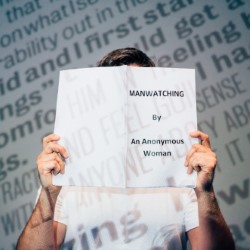 MANWATCHING, begins with a male comedian being given a script they have never seen before, in this case Stuart Goldsmith. They read the script out loud, sight unseen, in front of an audience. A living doll to enact the written text, the male comedian brings his own style to the performance, but it is the text that takes precedent. Depicting sociological interactions between women and men, this show voices the private monologue that dictates female actions. This is a show about what one woman considers when she thinks about sex with men.

Placing the text in a man’s voice is an extremely clever tool, it delivers a message that at least one man has listened to the personal account and experiences of a woman, leaving the female members of the audience feeling somewhat liberated. Graphic and descriptive until the ending climax, a vote is taken to identify the desirable qualities looked for in a man, I leave the theatre with a picture of my ideal match. 4/5

MANWATCHING is currently showing at the Roundabout Summerhall until Sunday 27th August 2017 as part of this year’s Edinburgh Fringe Festival. For more information on the production, visit here…