How to Win Against History @ Northern Stage Review

Having received rave reviews two years running at the Edinburgh Fringe, How to Win Against History has a lot to live up to. The small setting and audience of Stage 3 at Northern Stage, feels like the perfect backdrop for this unique musical. Seiriol Davies captures your attention from the minute he walks on stage, he had most of the audience in hysterics within less than a minute. 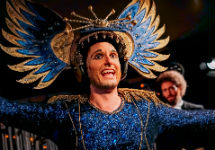 How to Win Against History is the story of Henry Cyril Paget, the 5th Marquis of Anglesey. Henry is a cross-dressing aristocrat who is desperate to impress people with his plays. His desire to be fierce and fabulous leads him to a penniless ending. Henry longs to be remembered and not wiped from history without a trace.

For a minute, I feel like I don’t know what is going on when the show first starts. That seems to add to the comedy of it. Random outbursts of laughter come from people in the audience who obviously feel the same. The 3 cast members are in perfect synchronicity throughout the performance; with the music and with each other. Their comedic timing is flawless, both individually and as a group.

The clever lyrics is what sets How to Win Against History apart from a lot of other musicals. They contain punchline after punchline. So much so, there are many that may have gone amiss as people are still laughing at the one before when the next one comes along. The change of pace within the songs keeps me hanging on every word. The writing is done with a sharp-witted mixture of historic and current content, and humorous explanations of some of the history. Again, this is done in a very clever way; rather than stopping to explain and ruining the flow of the piece.

The audience interaction in How to Win Against History makes the show what it is, the cast interact with the audience throughout the performance. Even if it is just a glance at a particular person, or pointing somebody out when singing a certain lyric. So much so, the audience are even taught to sing a certain part in one of the songs. This is done very smoothly, and goes down very well. This is a testament to the performance as something like that could easily lower the standard of the piece, making it feel somewhat like a pantomime.

Overall it is a very strong performance and good fun to watch. Seiriol Davies does the most entertaining faces I have seen on stage. He draws constant laughter from the crowd even when he isn’t speaking. I don’t think this one is a show for everyone, I know some people would struggle to keep up with the pace of it. I enjoy the change of pace however, and feel a lot has been put on show in a small amount of time. I leave the show feeling as if I have just seen the funniest and weirdest musicals I have ever come across, but I love it anyway. 4/5

How to Win Aganist History was shown from Tuesday 10th to Wednesday 11th October at the Northern Stage Theatre. To find out more about the production, visit here…

How to Win Against History, Northern Stage, Seiriol Davies
13th October 2017by Theatrefullstop