Samurai Macbeth? The words of the bard spoken in Japanese? I was instantly intrigued, if a little sceptical. Would a play in that asked me to read surtitle engage for almost 3 hours? Would the text be able to support such a radical departure in the setting? Will there be anything more to this production than just a change in aesthetics? 5 minutes in I receive an empathic yes, yes and yes. From the inciting scene with the three male geisha witches and Macbeth, it becomes clear that this is a special production and one of the most beautiful spectacles I’ve seen all year. 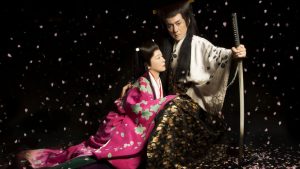 The late Yukio Ninagawa and his company adapted many Greek tragedies and the works of Shakespeare and for the first time in around 30 years, Macbeth is back on UK shores. It starts with a bang. Ornate doors within doors are parted like curtains at the cinema; inviting the audience in to the action. Thunder, lightning, and falling cherry blossom under a blood red moon. Macbeth trots out on horseback and talks to the witches,  this all feels familiar; ambition, naivety, love and loyalty are all explored throughout the piece with a feudal Japanese twist that fits like a glove. The costume, staging and acting are superb. They make the production feel like an Akira Kawasaki movie. One scene in perticlarllar with terracotta warriors completely takes my breath away.

At times the production is subtle and tender particularly in the quiet moments between Macbeth and Lady Macbeth. Masachika Ichimura’s Macbeth blends physical presence with philosophical pensiveness. Tanaka stays sweeter for longer than most productions and is a gentle catalyst for evil. At times particularly on the later acts the acting is as loud and melodramatic as anime.
As well as looking sumptuous, what I love most about this production is the sense of verisimilitude. This production is pregnant with truth. Like all great Shakespeare, it cuts to the heart of the human condition. It evokes thoughts and feelings that we all have had. While watching the piece I am struck with a sense of “this could have happened…this feels true”.

This production stays true the original 1985 run. Aside from the actors, little has been updated in a desire to remain faithful to Ninagawa’s vision. Aside from now overused Adagio for Strings this production feels fresher and more vivid than most UK based Shakespeare. 5/5

Ninagawa Company’s Macbeth was shown at the Barbican from Thursday 5th until Sunday 8th October. To find out more about the production, visit here…