Ramona Tells Jim is a familiar plot, a romcom-turned-tragedy told through the characters of long-lost first loves Ramona and Jim, and the girl that Jim ends up dating, Pocahontas. (No, I don’t really get it either). Unlike the other great R & J’s in the dramatic canon – Romeo and Juliet – this play offers insight into ‘what happens next’, demonstrating in the process that expectation does not always equate with reality. But this is not entirely original thought, and it’s here that the play begins to unravel somewhat. 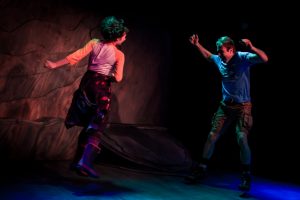 Sophie Wu’s debut play has moments of sharp dialogue that is aided and abetted by the performances of Ruby Bentall, as Ramona, and Joe Bannister, as Jim. Ramona, an awkward, fleece-wearing teenager, meets Jim, a crustacean-loving boy, on a school geography trip. Their interactions are believably gawky, and heart-warmingly drawn, such that the audience cringes both for and with each character. Mel Hillyard’s direction is astute in judging development of pace, and uses the Bush Studio’s thrust stage effectively, such that Bannister and Bentall’s physical interactions mimic the rhythms of their speech. Scene changes between these ‘before’ scenes and their ‘after’ counterparts are similarly smooth and inventive, working well with music to maintain mood and atmosphere.

These ‘after’ scenes, however, are less engaging. Amy Lennox’s Pocahontas, the girl that the hapless Jim ends up with, is in real danger of coming across as a derogatory caricature of a small-town, working-class and none-too-bright girl, and her opening scenes are unsubtle in their character development. This is only saved by later progression, where Pocahontas’s dreams of being a mortgage adviser with her own desk, and having a house with black and white images of the New York skyline are poignantly offset by Ramona’s confession of her own career dissatisfaction. These moments compare brilliantly with Bentall’s genuinely heartbreaking portrayal of an adult Jim who is unable to convey his love for and of seashore life to the tourists he guides around the beach. Otherwise, and sadly, the adult scenes are less convincing. The already mentioned interaction between Ramona and Pocahontas, though dynamic in content, comes too abruptly within the plot as a whole to make sense, and the critical plot-point confessed by Ramona is not wholly surprising. These scenes need a slightly more nuanced construction to really unlock Ramona, Jim and Pocahontas’s story, because the play does have moments of brilliance. I still can’t decide whether I actually want Jim and Ramona to even work out, so cruel and flawed are their characters. That, certainly, is one of Wu, and the play’s, victories: portraying imperfect, ambiguous relationships and people. These young lovers are better off preserved forever young, like the crustaceans that hang in jars on the set’s back wall, eternally pickled in formaldehyde.

An imperfect play for imperfect characters, then, but Sophie Wu shows real potential as a new playwright, and the Bush’s production of Ramona Tells Jim is engaging, strengthened by strong performances. 3/5

Ramona Tells Jim is currently showing until Saturday 21st October at the Bush Theatre. For more information on the production, visit here…