When I moved to London ten years ago, I experienced colour-blind casting for the first time. After a while, I didn’t even notice any more, and Trevor Nunn’s all-white production seemed somewhat strange to me because I was now used to seeing a more diverse cast performing Shakespeare’s plays. When I returned to Munich this year, I found that little had changed in Germany. Even though the population had become more diverse the German theatre was still white. 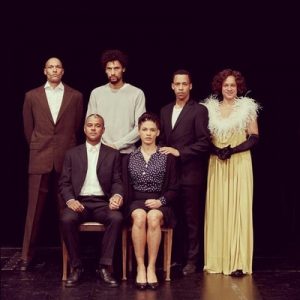 The Munich-based director Anta Helena Recke noticed the structural racism of white theatre institutions whilst working as an assistant director on various productions at the Kammerspiele. In her opinion, German theatre was produced with white casts and with a white audience in mind. A white actor on stage was never questioned because the audience could identify with them. A black body on stage was exotic and evoked different reactions in a white audience. To prove her point, Anta Helena Recke decided to direct a “black copy”(quote by Recke) of Anna-Sophie Mahler‘s highly acclaimed production Mittelreich. Recke would present the same work – the same text would be spoken, every gesture would be copied, costumes, make up and stage design would be the same – with an all-black cast and a black orchestra. The technique of divergent repetition, also known as appropriation, is already established in dance or the fine arts, for example the famous painting of “Washington Crossing the Delaware” is copied and changed to have jazz heroes replace George Washington, thereby including African-Americans in the national narrative. Anta Helena Recke is one of the first stage directors using this technique for her debut production at the Kammerspiele.

Mittelreich is based on Josef Bierbichler‘s autobiographical novel, a family saga covering one hundred years of German history. The story focuses on three generations of innkeepers in rural Bavaria, starting shortly before the First World War. The younger son of the Seewirt is dreaming of a career as an opera singer. His older brother will inherit the farm and inn so he will either have to work for his brother or walk a different path. A chamber singer hears the boy sing in a church choir and takes him on as her student. Yet his dreams are shattered when his older brother returns from the war, badly wounded and mentally ill, making the younger son the future heir.

Anna-Sophie Mahler’s musical theatre production premiered at Kammerspiele – Kammer 1 – in November 2015 and was subsequently invited to the Berliner Theatertreffen. Her work can be considered a funeral mass about the German post-war era, using excerpts from Johannes Brahms’ requiem to structure the story. The performance begins and ends with a funeral. The Seewirt returns from World War II, traumatised and refusing to talk about his experiences. His son is sent off to a boarding school run by monks where the boy suffers sexual abuse. His mother is diminished to a mere reproduction machine. There are only losers in Mahler’s requiem.

Anta Helena Recke was assistant director of Mahler’s production. Therefore, I assume that she succeeded in presenting a rather exact copy of the original, not having seen Mahler’s production myself. Yet did Recke evoke those reactions from the white members of the audience – the audience was more diverse than usual when I attended the performance – that she expected or hoped to see?

One of the big themes of Mittelreich are the refugees from other parts of Germany who arrive in Bavaria. I notice that it does make a slight difference when a black actor criticises the constant stream of refugees: “These people are completely different. They don’t fit in.” However, the themes discussed in Mittelreich are so universal that the story could take place almost anywhere and Mahler has already disposed of naturalism, making the play and setting quite abstract.

It is rather difficult to judge a production that is supposed to be an exact copy of another production. Mahler’s production is a great one and very relevant for this time and age. Appropriating her work for a copy means that the creative process is very limited and the actors are restrained by mimicking every single gesture and intonation of the cast playing the original roles. However, the cast of Recke’s copy is very good with Victor Asamoah giving an outstanding performance as the refugee Victor from East Prussia, mastering the dialect and providing some of the necessary comic relief. Yosemeh Adjei and Isabelle Redfern impress with their beautiful voices. 3/5

Mittelreich – The Copy is currently showing at the Munchner Kammerspiele until Saturday 21st October 2017. For more information on the production, visit here…