Maggie Bain captures the audience from start to finish in this one woman show. Her ability to seamlessly swap between characters and accents has me hanging on her every word. The intrinsic lighting and set of Man to Man allows the performance and production to come together perfectly. 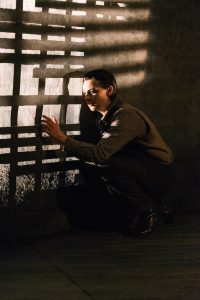 Courtesy of The Northern Stage Theatre.

Man to Man is the story of a woman called Ella Gericke, after the death of her husband Max, Ella goes to extreme lengths to survive in Nazi Germany. She adopts his identity and takes on the many challenges that brings in order to avoid discovery. Based on a true story, this show provides a unique working-class perspective on 20th century Germany.
Originally written by Manfred Karge and premiering in Germany in 1982, the play has undergone a transformation of sorts. Whilst remaining true to the original author, there has been the addition of a fairy tale element to the piece. The lighting and projection work used during the performance brings this to life. The reflection of Ella holding up a baby when she is in fact holding a cushion is particularly powerful.

The set has been very cleverly designed, it initially looks to be a very simple setting of one room with a chair and a bed. Watching the play, you very quickly realise that looks are deceiving on this one. It is full of intricacies that are so subtle and skilfully disguised, you don’t know they are there until they are being used to tell part of the story. This allows for a great level of movement and versatility within the piece which Maggie performs with ease. It also adds a greater depth to the show leaving you feeling that you don’t know what is coming next.

Man to Man is not for the faint hearted, it has an intensity throughout and at times pushes the boundaries. In this case the story requires intensity, it’s about tough times and about survival. There are some slight hints of comedy in the piece providing moments of relief, but this is very quickly brought back to the turmoil that Ella is facing. The play provides a rare working-class insight into a very well publicised era of German history. This is apparent through Ella’s constant fight to survive, her need to work and to earn money.

Hearing from Maggie after the show, she tells us that this is the only one woman show she has performed in. After just watching her fantastic performance, I assume this is something she has done many times throughout her career so I’m even more impressed now knowing this. Listening to her describing the process the Wales Milennium Centre Production has gone through to bring this to the stage, it is clear to see that it has been a collaborative process throughout. This is demonstrated by how well the set, lighting and Maggie all merge to create such a powerful performance. This is one not to miss. 5/5

Man to Man is currently showing until Wednesday 18th October at the Northern Stage Theatre. To find out more about the production, visit here…