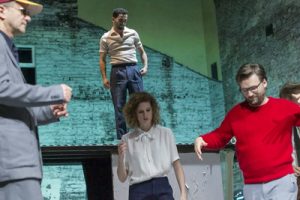 Written in 1950 and published in 1957, Jack Kerouac’s roman à clef “On the Road” is regarded as the defining work of the postwar Beat and Counterculture generations, describing the protagonist’s life against a backdrop of jazz, poetry, and drug use as Kerouac’s alter ego Sal Paradise and his friend Dean Moriarty go on a super hip road trip across America looking for adventure, sex and transcendence.

With a combo of jazz musicians and actors, David Marton tries to interweave the flow of Kerouac’s text with music, using improvisation to create images that illustrate Sal Paradise’s search. Yet Amber Vandenhoeck‘s repressive stage design already indicates that Marton’s ideas are somewhat different from the novel. Instead of a wild road trip across wide open spaces, Marton presents images of hung-over frustration, exhaustion and desolation on a walled-in stage complete with quonset huts. It feels like Marton thinks that Kerouac’s story cannot work in today’s world any more.

The musical cast – Thomas Schmauser, Julia Riedler, Hassan Akkouch, and Jelena Kuljić – take turns in telling the story, sometimes reading from a seemingly endless scroll, indicating the reel of paper Kerouac used to write his novel. Thomas Schmauser, in his final production at the Kammerspiele, shuffles listlessly across the stage with stiff, jerky movements possibly indicating Sal Paradise’s need to escape conformism while the impressive Jelena Kuljić is singing the blues . Middle-class respectability complete with cute little children is projected onto the walls and contrasts with the dingy bar where a tired looking Schmauser frames the production by dragging the same glass across the counter over and over again although it is clearly empty.

David Marton and dramaturg Christine Milz adapt a new translation by Thomas Lindquist of Jack Keroac’s novel and use improvisation workshops during the rehearsal process to create images that illustrate the chosen text. Some of the images work better than others. Adults behaving like infants, mangling Kerouac’s words in some irritating baby talk, is one of the less inspired ideas. There is little of the ecstasy of Kerouac’s novel in this production which might be intentional. Once Sal’s buddy Dean is out of the picture, leaving his sick friend behind, the evening begins to feel slow-paced and a bit dull.

It should not come as a surprise that the strength of this production is the melancholic beauty of the music – dark jazz transcending from discords to baroque splendour, from Bebop to hymns. Paul Brody (trumpet), Daniel Dorsch (keyboard), Michael Wilhelmi (piano) create magical moments as Jelena Kuljić’s voice transports the audience into a different dimension. 3/5

On the Road will next be shown on Saturday 4th and Sunday 26th November 2017. For more information on the production, visit here…