Win a pair of tickets to Goats at the Royal Court Theatre! 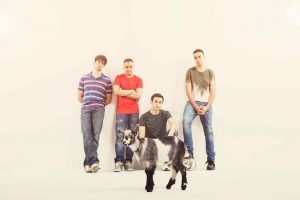 From Friday 24th until Saturday 30th December, Liwaa Yazji’s Goats will make its debut at the Royal Court Theatre. Initially performed as a stage reading which was a part of As Told From the Inside: Stories from Syria and Lebanon last year, the topical play is translated by Katherine Halls and directed by Royal Court Associate Director Hamish Pirie.

Set in a small town is Syria where the effects of war are a harsh reality for many, soldiers are highly revered as citizens are left listening to and observing the propaganda perpetuated by the government. As the body count rises, the local party leader decides on a scheme to compensate families, by giving each family a goat for every soldier killed in combat.

A play examining the rules and regulations of the few governing the many, Goats questions the lack of information given to the majority. Who is to start the process of evoking change, should the governement take on a more transparent approach? Should citizens demand answers? This constant spiral of questions form the basis of this incredibly timely piece.

Writer: Liwaa Yazji – Yazji’s work has spanned both stage and screen, her documentary, Haunted having received a Special Mention at the First Film Competition at FID Marseille and winning the GIGAF Festival Tunis Al-Waha Bronze Award. Yazji has also released a volume of poetry, In Peace, We Leave Home and was resident poet at Poets House New York. Development of Goats started in 2013, with Yazji taking part in a series of workshops run by the Royal Court in Beirut for writers from Lebanon and Syria.

Translator: Katherine Halls – Halls holds a BA (first class honours) in Arabic and Hebrew from the University of Oxford. To date, Halls has translated both spoken and written forms of colloquial Arabic having worked with Egyptian, Sudanese, Lebanese, Palestinian, Syrian, Iraqi and Algerian dialects. Halls has worked with the Royal Court on multiple productions.

The Royal Court are offering a pair of tickets to any showing of the month long run. To be in with a chance of winning, answer the following question:

Where is Goats set?

For your chance to win, send an email with your answer,  name, and contact number to theatrefullstop@gmail.com. All entrants will be emailed with a discount code after the competition ends so by entering this competition you agree for your contact information to passed onto the Royal Court Theatre. The deadline for this competition is Friday 17th November 2017 at 11:59pm, Good luck!

To find out more about Goats, visit here…