When do we officially become adults? Well, according to law, in the UK it’s at aged 18 however this changes dependent on where you live in the world. On a biological level, adulthood is reached from roughly our early 20s to mid 30s. Surely the age in which adulthood is reached should be clear cut? However, there are different schools of thought explaining when it is they believe we reach this stage in our lives. 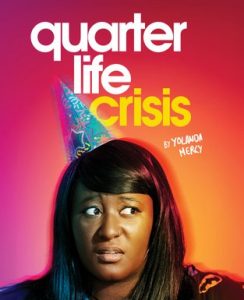 We’re all aware of the ‘mid life crisis’, a term coined to demonstrate the transitional point in a person’s life in their late 40s to early 60s whereby confidence and life choices are questioned, however there’s the assumption that this is the only stage in our life cycle whereby any major changes appear to occur. This isn’t the case, Yolanda Mercy’s Quarter Life Crisis taps into the zeitgeist and brings to question how adulthood has changed within the last decade. Transitioning from adolescense to adulthood is stage often overlooked but none the less, significant. Here, expectations to settle down, know who we are, secure a lucrative career and deal with life’s obstscles are supposedly a given, but what if these expectations are not met?

Mercy handles the prominent theme of adulthood with humour throughout the evening. She’s careful not to take herself too seriously however in doing so is able to bring to the forefront some important issues. Through dialogue, Mercy runs her life in parallel to her family members, speaking of how when they were the same as age herself, they had accomplished great things. Here, she’s commenting on how the younger generation of today live in the shadow of expectation in a social and political climate that does not allow for them to prosper in a manner in which previous generations have been afforded too, and this is silently powerful. Mercy is showing that subtly, she is a voice of a young generation asking to be heard.

Mercy discusses sexuality, comically commenting on our swipe left, swipe right world. The expectation to be in a loving relationship and settle down lingers, again this is generational. Society is more accepting of being single now more than ever, being in a relationship not necessarily equating to ‘adulthood’. Family is also an integral part of the evening, adopting an anecdotal structure, Mercy’s one woman show is brightened up by her vivacious characterisations. Of Nigerian heritage, Mercy effortlessly interweaves this into the piece. Mercy proudly stamps her cultural identity, showing that we all go through the same issues no matter your background.

The minimalistic stage design consisting of colourful pillows help to establish the light hearted atmosphere. The video projection, projected onto two circular screens give the evening it’s vivacious signature. Images of family, important figures within black history, English surtitles as Yoruba phrases are heard overhead and emoji equations are a fun addition to the show. An honest, entertaining trail of thought continuing to ask the question of what constitutes adulthood in the early 21st century. 4/5

Quarter Life Crisis was shown on Tuesday 31st October at the Soho Theatre. To find out more about the production, visit here…