It’s not easy to know what to expect from Kate O’Donnell: You’ve Changed before stepping into the theatre. It is, undoubtedly, an unusual show with an unequivocal and self-explanatory title. Transgender actress Kate O’Donnell grabs the audience’s attention right from the start and takes them – with a giggle here and there – through the challenging stages of her transitioning, accurately describing the numerous steps which such a substantial change entails. 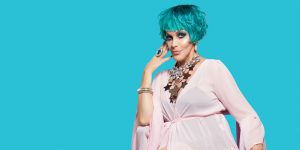 O’Donnell immerses herself in the jazzy 1930s atmosphere, wearing a suit in the style of the emblem of masculinity and artistically factotum Fred Astaire, dancing, singing and acting her way through the steep path of difficulties that eventually flew her all the way to Thailand, where the fateful operation took place. She sumptuously points out how little support she gained throughout the entire process. Even her “pagan lesbian cousin”, who would have been in the best position perhaps to understand her, wasn’t of much help. Instead, O’Donnell went through constant pointless medical appointments and psychiatric therapies, spending far more money than she would have wanted to.

The real highlight of the show – and at the same time, probably one of the most awkward scenes to be performed on a theatre stage – is an open dialogue between post-op Kate and her vagina, explicitly framed in a quadrangular box between red curtains, in which a member of the audience gives voice to her newly acquired genital.

O’Donnell cleverly interacts with the spectators and creates an emotional bond with them by narrating her story in an authentic and sincere manner. She is a good actress and knows how to buzz around the stage, helped by her assistant in her gradual undressing throughout the show – arriving to the aforementioned eccentric scene – as if she is an overgrown hedge that needs to be pruned. The show is packed with jokes and ironic lines, generally laughing at the petulant questions and perplexities that straight people annoyingly harass transgenders with. The stage setting surely isn’t the most breath-taking scenic design a theatre will ever witness, however it’s very practical and its various components are intelligently moved around during the show as needed.

Kate O’Donnell: You’ve Changed is an interesting play and offers a deep insight into the struggles of transgenders who still find it difficult to openly be themselves. It makes the audience smile and keeps everyone entertained, although if it lasted longer it would start to be slightly tedious and repetitive. Overall, a pleasant show. 3/5

Written by By Oliver Ross Assogna.

Kate O’Donnell: You’ve changed is currently showing until Wednesday 1st  November 2017 at the Northern Stage Theatre. To find out more about the production, visit here…