Le Gateau Chocolat, always a favourite at the Soho Theatre, is back in their downstairs space for a limited ‘encore’ run of Icons, a disco-pop explosion come auto-biographic memoir. A true cabaret legend with CV highlights that include The National Theatre, The Globe and The Sydney Opera house, Icons offers us a glimpse into the person behind the persona. 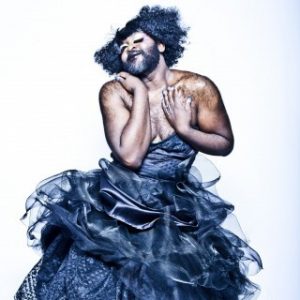 Entering the stage in a Grace Jones-esque, sequinned ensemble, Le Gateau Chocolat’s ravishingly gorgeous voice flourishes beautifully throughout this hour long spectacle. Connecting icons that have a personal resonance with him to moments in his life that have shaped the person he is today.

Le Gateau’s renditions of Kate Bush’s ‘Running Up That Hill’ or For Good from ‘Wicked’ are amongst the most evocatively arresting numbers in his set. The obstacle in this piece is the muddled narrative. Stories such as him growing up in a Christian community in Nigeria seemingly fall to the wayside, and the correlation between the icons he chooses and their meaning to him are somewhat flimsy.

However, from Whitney Houston to Dolly Parton, the audience lap up his glittering showmanship with awe. You can tell Le Gateau’s style has been heavily shaped by his underground cabaret days, charmingly playing the audience with ease.

Death, depression and unrequited love are themes peppered throughout, and though they’re not the most ground breaking ones he handles them with a genuine care and tactfulness. Le Gateau is a treat to watch; this isn’t the most structurally sturdy performance he’s ever given, though he’ll certainly bowl you over with a vocal prowess that is hauntingly powerful. 4/5

Icons is currently showing until Saturday 4th November at the Soho Theatre. For more information on the production, visit here…