Relativity, probability, possibility, certainty, knowledge, fame, selfhood. All of these interweave in the Arcola’s revival of Terry Johnson’s play. It’s an overwhelming collision of ideas that fares best when considering ideas of bodily autonomy and identity set against the fierce, faceless consumption of celebrity. 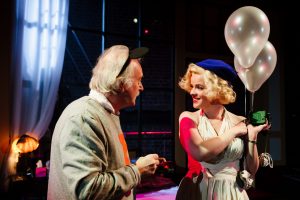 Knowingly or not, the play references the late John Berger’s ‘Ways of Seeing’ in its searing insight into the plights of the mid-twentieth century American (and, therefore, ostensibly, the modern American), existing in a future endlessly deferred: promises everything but delivers nothing. These intertextualities are some of the points at which Johnson’s text shine: a conversation between The Actress – clearly Marilyn Monroe – and The Professor – Einstein – on names and naming result in a knowing reference on Arthur Miller’s ‘The Crucible’. However, at other points, the echo-chamber would perhaps be better left silent.

A duologue between The Actress and The Professor, where the former spouts the latter’s own theories back at him, is turgid and over-long – it’s just not compelling theatrical material. There are also basic blocking problems here, in contradiction of Theatre 101: in a thrust stage, never direct two actors to face each other on parallel lines. Diagonals only, otherwise the audience stage-right and stage-left end up only ever seeing one actor’s back.

Overall, however, the acting is solid, with moments of excellence – with the exclusion of Simon Rouse, whose considered Professor, burdened by professional guilt, stands out consistently. Sadly, the character of The Senator is too friendly given his historical model. Such is this excessive amiability that it doesn’t even really click with me that he might be Joe McCarthy, despite the insistent references that he is so. A more sinister tone needed to be struck – McCarthy is a good, white, American Wisconsin man, sure, but he is nonetheless a paranoid, slippery, fear-mongering politician.

Alice Bailey Johnson as The Actress has her moments, but the portrayal of one of the world’s greatest pop culture figures will always be challenging, and her accent slips one too many times, breaking her wholesome American characterisation. That said, wry smiles and exasperated eyes create moments of comedy gold when they are used. Scenes between The Senator and The Actress are rendered particularly uncomfortable in a post-Weinstein world, and the play engages effectively with problems of gender in Hollywood that, sadly, seem not to have made any progress over half a century later.

Insignificance offers an enjoyable night at the theatre, that picks up significantly after about half an hour – but it’s a shame the audience have to wait so long in order to get to these moments. The production does well, broadly, but the script is perhaps best left for intellectual interrogation, rather than use as a theatrical text. Go for Simon Rouse’s performance, to consider why Marilyn Monroe is so omnipresent in cultural memory, and to remember that this is not the first time America has seen a hate-preaching, narcissistic politician. 3/5

Insignificance is currently showing until Saturday 18th November 2017 at the Arcola Theatre. To find out more about the production, visit here…