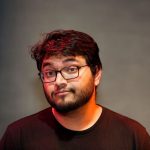 Silicon Valley is synonymous with tech excellence, having produced some of the world’s most famous tech products and services, from Mark Zuckerberg’s era defining Facebook, to Steve Job’s influential Apple products to Larry Page and Sergey Brin’s innovative Google. These accomplishments define the Californian region, however not everything is all as it seems. Comedian Sid Singh unearths the racism and gentrification prevalent within the region in his latest stand up show ‘American Bot’. Read on to find out more about the show.

Hi Sid! You’ll be performing your latest stand up show American Bot at this year’s Edinburgh Fringe Festival (The Mash House – Cask House). How are you feeling ahead of the run?

I’m honestly really nervous. I’m so used to being funny. Being funny and having a point in my show that I believe in is super new to me. That audiences have enjoyed my previews is the weirdest feeling because I’m so used to doing a New York style that is going for all laughs. Here for the first time I’m trying to do that while also trying to direct those laughs at specific monsters.
American Bot is a show unveiling the not so perfect environment Silicon Valley would otherwise like for the public to remain unaware of. What will you discuss during your show?
I think as someone who faces racism (not uniquely so;) I always wanted to make fun of that specific racism in the moment. This show was a chance to peel back at that racism and make fun of the weirdos at every level who made that moment possible. So instead of just making fun of the racist bouncer, I’ll make fun of the racist tech nerd who gentrified that bouncer’s city and the racist politicians who felt better letting that bouncer think that it was better to let crazy stereotypes survive than confront those tech billionaires.
What would you like for audiences to take away from the show?
Well first off, I want them to laugh. I don’t care how serious I get at points in the show, life is crazy and laughter is cathartic. They came to a comedy show and I want them to have an entertaining time. This year though, I’d love to focus that laughter on the people in power who want our admiration. Those people are goobers and deserve to be made fun of.
You grew up in Silicon Valley, having watched a once organic, liberal environment turn into a corporate fuelled powerhouse. What was it like watching this shift?
I loved it growing up and then left for 8 years to go to college in LA and then do comedy in New York. Coming back was eye opening because all these valuable places where people felt at home were priced out of existence. Then as the head of the homeless legal services I got to see the actual people who were being priced out of this city without recourse in their home city and without another city being willing to take them in. Even worse, the people doing it, these tech billionaires…they’re huge dorks! We take these guys seriously and we put them in powerful positions in society…and then they (specifically Elon Musk) call heroes who save children pedophiles because they don’t like their submarine! It’s ok to respect a man for the product they made and still laugh at him for being a f*cking dork!
Your comedic career has seen you perform stand up in New York, Los Angeles and San Diego, star on shows on MTV and NBC as well as appear on BBC Radio 4 and BBC Asian Network. How do you approach creating and performing content for each of the platforms?
Well honestly its all luck. Probably not the answer you want to read if you read this far in, but truly, I just try to write jokes that make me laugh and then do them as often as possible in as many places as possible. I have been eternally lucky that the right people have noticed them. I just want to create cool things that I like and hope people like them too.
Your debut stand up album Amazing, Probably reached no.3 on the iTunes US Comedy Chart. How did that make you feel?
Man that was [the] craziest thing. Honestly I only made that album because the clubs in San Francisco wouldn’t book me because “I hadn’t lived there long enough and we don’t care about credits.” I seriously even got rejected from a famous comedy festival there because “they already had a comedian named Singh.” It really hurt because I had gotten to do hours on the road in America and at the Fringe in Edinburgh but then I came back to my hometown and they were firm with their decision to never book me. So I just started booking myself until I could get enough locals to like me and come see me do an hour. The decision to tape it just gave me some motivation in terms of having something to look forward to. So that album is extra special to me because it reminds me that you can find your own stage and audience when the gatekeepers of comedy close their doors.
Who or what inspired you to become a comedian?
Honestly its such a terrible list of names that you can’t say anymore who inspired me to get on stage to try and be funny with my own particular style. What IS exciting is that the people who continue to inspire me and push me to get better at comedy everyday are also super funny, talented, and very diverse. You can even see many of them at the Fringe like Ed Day, Aatif Nawaz, Dan Audritt, Eshaan Akbar, Tamar Broadbent, Rahul Kohli, Kat Butterfield, Jamie Oliphant, and honestly more. The Fringe is a great time to watch new acts blossom.
What advice would you give aspiring comedians?
Get on stage as often as possible and be ok with failing. It sucks to bomb, but it sucks more to never try. You have every bit of reason to go on stage as anyone you admired in the past did. And listen maybe it works out and maybe it doesn’t, but you die anyway, and why not make your life as full as possible before you do?