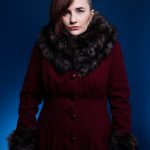 For lovers of comedy, the Edinburgh Fringe Festival is the go to event to witness some of the UK’s top talents. Decades have witnessed the launching of various careers, and shows no signs  of stopping in doing so. Winner of the ‘Best MC’ award at last year’s UK Comedy Awards, Laura Lexx promises ‘belly laughs’ with her latest stand up show Trying – a show exploring the topic of mental health. Laura talks more about the show below.

You’ll be performing your stand up show Trying at the Edinburgh Fringe Festival (The Turret, Gilded Balloon Teviot) throughout August. How are you feeling ahead of the show?

A really nice level of excitement and eagerness to just get on with it, along with a little shred of nerves about what it’s going to be like performing such a high energy show every day for a month.
What can audiences expect from your latest show?
A heady mix of nostalgia, belly laughs and no holds barred mental health exploration. My aim with Trying was to do a really joke heavy stand up show that was 100% on topic for depression and all the things that go with anxiety. It feels like I’ve managed it.
Last year witnessed you winning the title of ‘Best MC’ at the UK Comedy Awards and you’ve been nominated as ‘Best Compere’ at the Chortle Comedy Awards in 2016, 2017 and 2018. How does it feel to be acknowledged like this within the industry?
Oh, you know… there’s no amount of evidence that your career is going well that’s enough to convince a comedian that their career is going well. The UK Comedy Awards really, genuinely meant a lot to me because it was voted on by other comedians and that means such a hell of a lot that my peers like working with me. That was very, very cool.
Can you remember your first comedy gig? If so, where was it and what happened?
My first solo stand up gig was at Christchurch University in Canterbury and I did 5 minutes although apart from some ad libbing about a ceiling fan I can’t remember any of the material. As I remember it, it went ok but largely because I knew practically everyone in the audience.
Who or what inspired you to pursue a career in comedy?
Well, really I wanted to be an actress but in order to do that you have to go to auditions and look a certain way. That seemed annoying and frustrating and then I found out you could do stand up where no one has to let you, you can just keep turning up. I liked that so I just kept doing it.
Is there a particular process you follow in terms of generating ideas for shows?
This year has been quite different because it’s so narrative based so I’ve been doing an awful lot of listening back to previews and then rewriting. My aim has been tightening and honing and making sure that everything I’m saying is clear and on point… I don’t want any sections where I’m further away from a punchline than I have to be.
Jess Fostekew directs Trying. How have you both worked together to bring the show to life?
We’ve really worked together on finding the narrative arc and making sure the pacing is nice and varied to make it a real emotional ride.
What advice would you give to aspiring comedians?
Only do it for as long as you like the worst parts of it. All the bits you think you’re aiming for are not guaranteed so you have to like the bog standard stage time or it’s never going to be worth it.
Questions by Lucy Basaba.
Laura Lexx’s stand up show Trying will take place at The Turret, Gilded Balloon Teviot (Edinburgh Fringe Festival 2018) from Friday 3rd until Sunday 26th August 2018. For more information on the show, visit here…
Chortle Comedy Awards, depression, Edinburgh Fringe Festival 2018, Gilded Balloon Teviot, Jess Fostekew, Laura Lexx, mental health, The Turret, UK Comedy Awards
25th July 2018by Theatrefullstop