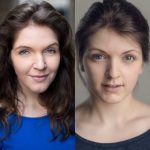 One of the strongest bonds you’ll share is that with a sibling, they’re there through the highest and lowest of moments, they’re you’re best friend as well as family. Every family deals with phases that test one another which can further strengthen bonds. Alexandra and Kate Donnachie explore the affects of one sibling being diagnosed with an eating disorder as a teen in their latest show, 3 Years, 1 Week and a Lemon Drizzle. The duo discuss the process of creating the show and what audiences can expect.

Your Show 3 Years, 1 Week and a Lemon Drizzle will be performed at this year’s Edinburgh Fringe Festival from the 1st to the 27th Aug. How are you feeling ahead of the show?

Good! We’re getting more and more excited about going up now. It took a little while because there can be a lot of admin to get through at first. Luckily we’re getting to a point now where we can focus entirely on the show itself.

3 Years examines the relationship between 2 sisters impacted by one of them being diagnosed with a severe eating disorder. How did you both find creating this play on an emotional level?

We talk about this a lot because we think it’s really important to be aware of our emotions throughout making a show.  It’s bringing up a lot of stuff that, prior to making the show, we wouldn’t have spoken about for fear of making the other one upset. It was really tough at first, manoeuvring and managing how to deal with the emotions that might come up. With only the two of us in the room most of the time, it was often a little too late when we realised something was going to set us off! Luckily, we are two people that understand each other in a way that no one else does so even when things did get emotional – in either good or a bad way – we have always felt as though we are in a safe place. Having said that, being so relaxed around each other has probably lead to more tears and laughter – and maybe a more honest work!

Alexandra: You’d developed 3 Years for roughly 2 years prior to what it is now. How had you approached creating this show then?

It was an unusual way of working! I would do a lot of stuff on my own in a room; hours of automatic writing, of playing games and writing the dream snippets of the show for us to play with when we were both in the room. I would then plan rehearsals meticulously as I often didn’t have much time with Kate during the weeks. For a long time, it was being developed as a one-person show and so to then switch to having to share the work was a little nerve-wracking at first – even if the person I initially shared it with was my sister! I think my reluctance to give away and share material at times, is reflected in the show.

3 Years initially started life as a one woman show. Why did you decide to change the dynamic?

It was a bit of a light bulb moment for Alex! When she was doing research and writing and scratching versions of a one-person show, she became very aware of there already being many one-person shows about eating disorders in existence. Any she saw or had recommended to me were great! It was hard not to think that there can’t have been much more for her to add to the conversation. Deciding to focus more on the knock-on effects of the illness on her family and close friends was a big but organic shift after Kate once – in passing – mentioned something about how she had felt during ‘that time’. Alex was mortified when she realised she had never asked. So then she did – and recorded the conversation and then started making this show!

Kate: Whilst developing the one woman show, your sister wanted to learn more about your perspective on being the supportive sibling. How did you find this part of the process?

I think a little surprising as I’d never thought about the fact that people would want to know that side of it. It didn’t take long to become comfortable talking about my point of view with Alex because she’s my sister, but I have noticed that I was never really that honest about it before and learnt a lot about how I felt then during those initial interviews with Alex. I feel like it changed our relationship a little for the better as, although we’re always open with each other, we began talking a lot more personally and I was no longer afraid to say what I really felt.

What would you both like for audiences to take away from the show?

We hope they will have fun! We also hope they will feel less alone. We are all affected by poor mental health – even if we don’t know it. It might be a family member, a close friend, or someone you don’t know so well but who seems to be in a different frame of mind every time you see them. It is often as tough for the loved ones of somebody with mental health problems as it can be for the person who is ill. We want people to want to open up more, even just to one person. We’d love audiences to want to call a sibling or close relative after the show.

Kate: What made you to want to become apart of the show?

Well, having Alex as a sister, I didn’t have much choice…in all seriousness, I was excited about the project, we started developing this iteration of the show when I was in my first year of drama school, so I knew it would be tough to manage, but when Alex pitched it to me, it seemed like an important story to tell and an interesting process, getting to work with her! Having grown up both aiming to be actors I had always wondered if we would work together so it seemed like the perfect opportunity. I’m so glad I said yes because although we were already close, I feel like we’ve become a lot closer and open with each other.

Keep writing anything and everything. It might never see the light of day, but it might change yours – or someone else’s life. Neither of us ever grew up thinking or even necessarily wanting to be writers. We both trained as actors predominantly but have been very lucky with our writing. Kate’s play, Shadow Folk has been programmed at the Tristan Bates Theatre later in the year with support from the Alan Bates Award and Alex’s play, When We Died was longlisted for the Bruntwood prize last year. Acting is still our first love and so to get to write and create when we’re not doing that is a privilege. You never know, you might be good at it or, if nothing else, you might just love it.

3 Years, 1 Week and a Lemon Drizzle Will be shown at Underbelly – Bristol Square as part of this year’s Edinburgh Fringe Festival from Wednesday 1st until Monday 27th August 2018. For more information on the production, visit here…